Aline Diépois and Thomas Gizolme, a visual and loving composition 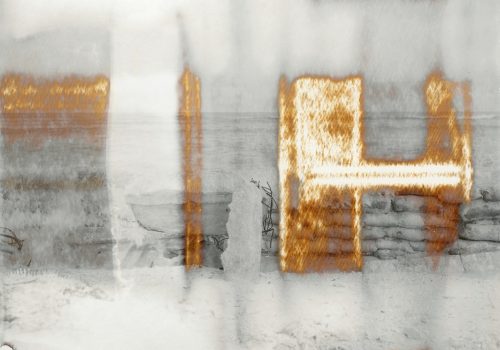 The photographers Aline Diépois and Thomas Gizolme are on show at the Galerie VU’ in Paris. Caroline Bénichou, the gallery’s director introduces this sensitive duo’s intimist work.

If it isn’t uncommon for two photographers to collaborate as a couple on one-off projects, it is even more unusual that they build one project with two pairs of eyes. This is the case for Aline Diépois and Thomas Gizolme who, for the last ten years, have thought, created and produced their series together. For them it’s not just an event, an exercise, taking a risk or playing a game, but a way of being in the world and looking at it. As the popular English expression goes “It takes two to tango” and their visual and loving composition is remarkable in more ways than one.

Until now, they had preferred to keep their works private. The publication by Steidl of the book Abstrakt Zermatt last winter gave them the impetus and the inclination to show them publically. Also, as we discovered their intimist, sensitive photographs, devoted each time to a territory and its landscapes, we set about showing two of their most recent series.

They play with spoiled and out-of-date chemistry and the little faults in the construction of their home-made darkrooms. Their images, often dreamlike and misty, with light leakages, accidents of chemistry, and sometimes bordering on abstraction, speak of the fragility of the persons and the world, the limits of perception, the intensity of emotion in front of a sublime landscape.

Abstrakt Zermatt is a visual journey through the Zermatt region in Switzerland (from where Aline Diépois originates), composed of small Polaroids and large format prints, The deterioration of the films, the effect of the cold and the altitude on the chemistry, with, here and there, sometimes, the trace of a snowflake fallen into the gelatine, make their images something beyond landscape photography, and places them on a pictorialist path, printing memories, traces and feelings.

White Isles of the South Sea, the second series on show here, tells of the disappearance of the Kiribati islands, a small archipelago lost in the South Pacific and condemned by global warming. The prints show the soft or sparkling touches of the sea at different times of the day, the delicate, blurred Polaroids gently tell of a paradise that is dying and drowning relentlessly. Aline Diépois and Thomas Gizolme accompany this series with sound recordings (wind, sand, waves washing onto the shore) and a film without words. The disappearance is implicit but nevertheless present in each image and the two artists have benevolently held onto some traces of a heavenly, condemned world.

Caroline Benichou is an author and exhibition curator specialising in photography. She lives and works in Paris where she directs the Galerie VU’.

The book Abstrakt Zermatt, published by Steidl, accompanies the exhibition.
40€