Alex Majoli : « Today, the world is covered with images » 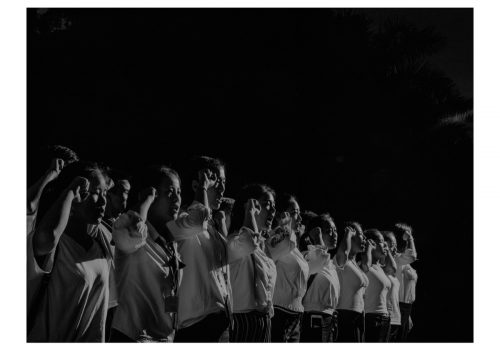 The Italian-born photographer presents his “Scene” series at the BAL in Paris until April 28th. Armed with an imposing device made with electronic flashes as in a studio, Alex Majoli catches the image of a group of people in strong situations, sometimes in events of the news. It questions the way of doing photojournalism today and tries to capture the theatricality of the world. He gave an interview to The Eye of Photography.

How do you realize these photographs?

Simply, I walk in the street, sometimes I go to an event, an event planned in advance and therefore an event where there is a possible “theatricality”, I go there and I see something that could interest me, so I ask my assistant to take a flash in the hand, I install another flash, I move to a certain position and I start taking photographs. With the first three flashes, I see how people react. Most of the time, people stay put and I continue to take photographs. After a few minutes, they pretend to have forgotten me or they really forget me, I do not know. After about seven minutes, they completely forgot about me, so I can really take a photograph. That’s when interesting things are revealed: characters, situations …

With your installation, that is to say your flashes that take up space and are particularly visible, do you not create yourself a “small event” in the event that you came to photograph?

When it comes to a big event, like funerals for example or refugees who are landing on a beach, I do not think so, because the event is too important in itself. But the rest of the time, maybe, yes. The history of photography shows that it has always been this way, that the photographer finally creates a small event in the event

And does the fact that people react in this way – that they start to forget you very quickly – is not the sign that they accept your role and theirs, that they assume the social character they are in this situation?

Ten years ago, people might not have reacted the same way

Yes quite. There is a habit of the image that was not there before. Now the world is covered with images and we are not surprised by photography. People probably accept better the presence of a photographer in the event.

From an aesthetic point of view, why do you choose black-and-white in these photographs and why do you use flashes?

The aesthetic comes from a myriad of inspirations … First of all the black-and-white comes from the fact that when I was learning photography, I looked at masters like Henri Cartier-Bresson, Josef Koudelka , Walker Evans … So, pretty soon I got used to shooting in black-and-white, like them. And then, for the light, for the use of flashes so, I was very influenced by Caravaggio, especially in Rome where I often went to the church San Luigi Dei Francesi where we can admire the paintings of the painter and obviously his incredible lights. Light is important because it is part of the device that allows highlighting, the theatricality of the world, what I seek in particular through this project.