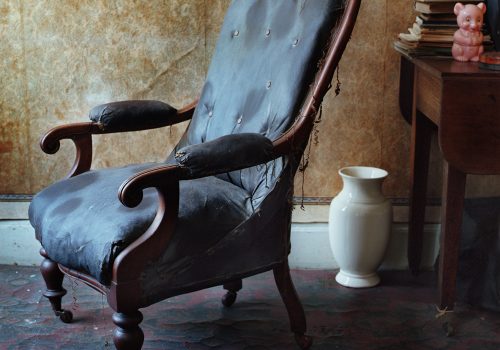 By serendipity and with a bit of Irish luck, Alen MacWeeney discovered the O’Neill house in Southwestern County Kerry, Ireland. Its owner, whose grandfather had built it, has not lived in it for many years, but, somewhat eccentric in his commitment to the memory of his ancestors, he maintains the house to preserve the tradition of landed Irish Catholic country life. Over the past two summers, MacWeeney photographed the interior of the house, which appears arrested in time: the boiler looks like a piece of conceptual art; the bathroom is decorated with flowers; religious paintings, including a 3D Jesus, alternate with battle scenes; and family photographs are everywhere. The bright colors of the walls contrast with the grey Irish sky, and the furniture – solid and a little worse for wear now – is typical of Irish country houses from a bygone era.

Like the house’s owner, MacWeeney believes in the importance of history, and he wants his photographs to be part of this process of preservation. His work is never completely finished, at least in his own mind. As MacWeeney, who was born in Dublin but now lives in New York, started taking pictures in the house, memories of his Irish childhood surfaced. He had both the distance and the knowledge of Irish customs to take in the details of domestic life, like the numerous religious pictures on the walls.

Houses take on the personalities of those who lived in them, and MacWeeney’s pictures document a particular time in a particular place. People are absent, but his photographs capture what life must have been like years ago – the books, the furniture, the dishes, the remnants of lives lived in this house. They are beautifully composed, lyrical still lifes, in which eccentricities are lovingly noted – small pictures of formal family groups, for example, are hanging so high up that you’d need a step ladder to view them. The Irish light is exquisitely captured. Looking at these pictures, I wander back to my own childhood, while admiring the photographs before me.