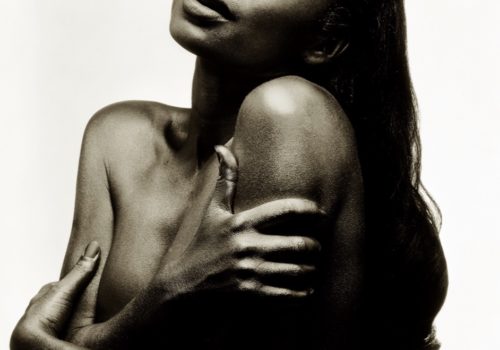 With over forty years of photography, Scottish photographer Albert Watson’s body of work is diverse. From Alfred Hitchcock to David Bowie, from Morocco to Las Vegas, his portfolio embraces fashion and portraits, nudes and dance, still life and landscape, photo-essays and advertising campaigns. Yet as diverse as it is, it bears a striking coherence. Through his lens, Watson bares his images to distill their essence, hence creating clear, intense shots which magnify their subject. Through a selection of 29 photographs, the exhibition Kaos, offers a kaleidoscopic approach to Watson’s artistic vision, from April 14th until June 10th at Opiom Gallery, in France.

Born and raised in Edinburgh, Scotland, Albert Watson studied graphic design at the Duncan of Jordanstone College of Art and Design in Dundee, and film and television at the Royal College of Art in London. Though blind in one eye since birth, Albert studied photography as part of his curriculum. In 1970, he moved to the United States where he began shooting photos, mostly as a hobby. Later that year, Albert Watson met an art director at Max Factor, who offered him his first advertising job. Albert Watson’s distinctive style eventually caught the attention of American and European fashion magazines such as Mademoiselle, GQ, and Harper’s Bazaar, which booked him for a shoot with Alfred Hitchcock, the first celebrity he ever photographed. In 1976, Albert Watson landed his first job for Vogue, and with his move to New York that same year, his career took off.

Over the years, Albert Watson’s photographs have appeared on more than 100 covers of Vogue worldwide and have been featured in many other publications, from Rolling Stone, to Harper’s Bazaar; many of the photos are iconic fashion shots or portraits of rock stars, rappers, actors and other celebrities. He also has created the photography for hundreds of ad campaigns for major companies, such as Prada,  Gap, Levi’s, Revlon and Chanel. He has shot dozens of Hollywood movie posters, such as Kill Bill and Memoirs of a Geisha, and has also directed about 100 television commercials.

Albert Watson and the Art of Dance Photography