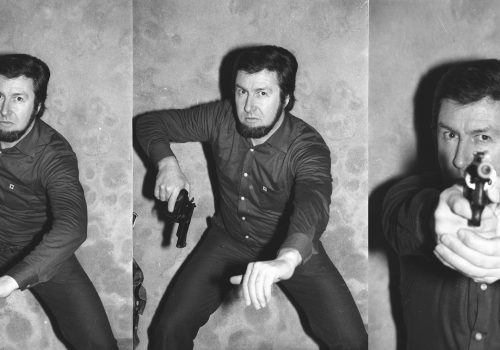 Alain Bizos shared his career between Liberation and the VU agency, the group of graphic designers Bazooka and the monthly Actuel, “Nouveau et intéressant” and thus positioned his work on a thread drawn between the fields of art and information. Since the 1970s, he has claimed himself a committed art activist  using humour and derision as his tools.

In 1969, just graduated from the Beaux Arts, he found himself at the heart of the New York avant-garde when he became Arman’s assistant. He participated in the renewal of conceptual photography by using photography as a support for his proposals, mainly through sequences such as his “Robberies”: the visitor follows the shoplifting committed by the artist. The stolen object (cricket set, electric spotlight, suitcase) was then exposed and accompanied by a certificate attesting that “any person who owns this work is considered to be a fence in the eyes of the law. Bizos asks: is a work of art a commodity like any other?

The artist also entails his gallery owners, his collectors – as direct receivers – and more generally the spectator, a tacit accomplice to the crime.

It is no coincidence that the artist-activist crossed paths in 1979 with “public enemy n ° 1” Jacques Mesrine, with whom he produced a photo sequences that passed to posterity, and published at the time by Paris Match.

“Politically incorrect” will also give pride of place to more recent pieces of Bizos’ work such as the sequence “Bye-Bye Mao”, exhibited in 2018 at the Rencontres d’Arles in the exhibition “100 portraits” of the collection of Antoine de Galbert, or the monumental piece “Marianne-colère”.

The works of Bizos paint a portrait of a personal work with a strong political content, heterogeneous and original but also fiercely funny.

Alain Bizos, born in Paris, student at the National School of Fine Arts, Painting Section and at the Louvre School in Art History. It was in 1969 following his meeting with the visual artist Arman, of whom he became assistant, that he moved to New York. He then produced conceptual photographic sequences, such as “Espaces interdits” or “Robberies” which he showed, at the Green Street Gallery in New York in 1970, and at the Ferrero gallery in Nice in 1972, his first personal exhibitions. Making frequent trips back and forth between New York and France, he participated in 1973 in the creation of the daily Liberation, linked with the group of young graphic designers Bazooka and in 1977 he was director of publication of the monthly “Un regard moderne”. In 1979, it was at the request of Jean-François Bizot, that he returned to France to participate as “artist-reporter-photographer” in the launch of Actual, the monthly “New and interesting”. His quirky portraits and reports in the form of “photo stories” mark the visual identity of the monthly through its original treatment of color and framing. In 1986, Christian Caujolle, then head of Liberation’s photo department, asked him to join him when the Agence Vu was created. In 2015, Alain Bizos left the Agence Vu ’and continued his work as a freelance photographer.