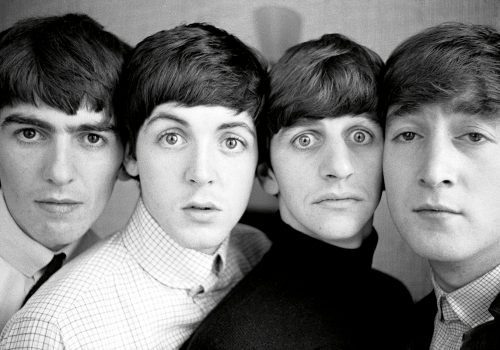 The archives of four photographers, Terry O’Neill, Norman Parkinson, Michael Ward and Derek Bayes are opened to reveal some fascinating moments from The Beatles’ early career, from 1963 to 1965. Complete with previously unpublished images and explanatory text by pop historian Tony Barrell, Beatlemania: Four Photographers on the Fab Four is a new look at one of the most legendary bands of all time, as immortalised by four masters of the camera.

From the foreword by Tony Barrell

(…) From early in their career, the group had the good fortune to work with some gifted photographers, each of whom made their own contribution to the global visual impact of the Fab Four. The images in this volume, taken by four such masters of the camera, tell the story of a quartet thrust into the spotlight and quickly becoming accustomed to unprecedented levels of public attention. Michael Ward portrays them in their home city of Liverpool in the depths of winter, before their fame explodes across the rest of the country.

A young Terry O’Neill finds them as recently established stars at EMI’s Abbey Road recording studio, cutting the song that would soon become their first million-selling single – ‘She Loves You’.

Norman Parkinson catches them a few months later in that same studio as they record their second UK album, With The Beatles, and his pictures show them gaining in confidence and having fun, revelling in the creative possibilities of the place that would be their musical laboratory for the best part of the decade. Derek Bayes encounters them by chance as they tear around the streets of Mayfair for their second feature film, Help!.

Studying Bayes’ 1965 photographs – which have remained unseen for 55 years and are published here for the first time – it’s astonishing to consider that within less than two years The Beatles would be working on their psychedelic masterpiece Sgt Pepper’s Lonely Hearts Club Band.

The collection of images in Beatlemania serves as an absorbing visual record of four exceptional young men as they begin to transform popular music. We can only be grateful to Michael, Terry, Parks and Derek for perfectly crystallising the nature of life in the age of John, Paul, George and Ringo.

Tony Barrell is a British author and pop historian whose previous books include Rock ’n’ Roll London: A Guide to the City’s Musical Heritage, The Beatles on the Roof, and Born to Drum: The Truth about the World’s Greatest Drummers.