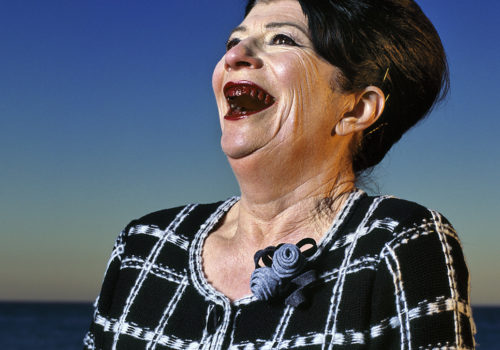 The Académie de France in Rome – Villa Médicis presents this fall the exhibition Comme un chien qui danse (Like a dancing dog) which honors the work, over nearly 30 years, of the artist and former resident of the Villa Medici Natacha Lesueur ( promotion 2002-2003).

Natacha Lesueur’s work is primarily photographic. Her artistic concerns revolve around the body, appearance, pageantry and the intimate relationship that the body envelope and its interiority maintain. Through series of images constructed like paintings, the body is subjected to various treatments that involve both constraint, staging and masking.

Curated by Christian Bernard, the exhibition unfolds in the form of a visual and thematic narrative that brings together more than 80 pieces by the artist, both historical and unpublished, offering an intimate look at her work around the image and its artistic and political issues.

The ironic dimension of the title borrowed from Virginia Woolf’s book A Room of One’s Own fully expresses her conscience as a woman artist and sets the tone for an exhibition where the incongruous and extravagant are treated with the utmost seriousness.

From the first historical pieces (1993–1998), to the very recent fairy-brides series (Les humeurs des fées, 2020-21), including works dedicated to the Brazilian actress Carmen Miranda, legendary figure of the Hollywood cinema of the 1940s, representations of the feminine inhabit the exhibition, often disturbing, always ambiguous. Through interventions on distinctive identity markers, hair and clothing envelopes, vehicles and symbols of femininity masquerades, by exploring dedicated roles and normative models – bride, mother, princess, actress, dancer, etc. – through the subversion of injunctions to beauty, youth or slimness, Natacha Lesueur seeks to reveal, not without humor, the manifestations of the expression of a social and cultural strain. Starched hairstyles, accessorized hair, XXL makeup and food hairpieces are all recurring puzzles in the narrative pictures exhibited at the Villa Medici.

Like a dancing dog also goes beyond the boundaries of the photographic medium to explore other aspects of Natacha Lesueur’s artistic production: ceramic fountain sculptures, earthenware vases, drawings and video works punctuate the exhibition, in dialogue with the photographic series, as a way of questioning the experience of the image and the fixity of forms.

Enigmatic figures of fairies and brides or familiar female portraits which expose themselves to view while concealing themselves from them: the exhibition Comme un chien qui danse offers a personal and cultural female genealogy of the artist, “a multiple, unfolding work on a path punctuated by her singular uses of the strange and the ambiguous ”, to use the words of the curator Christian Bernard.