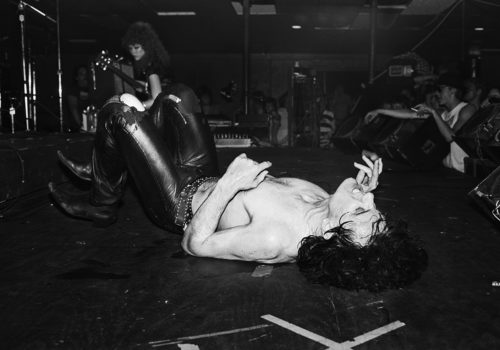 In a year when Covid-19 has swept the world, it is easy to forget what life was like beyond our insular bubbles, let alone imagine being packed into derelict, sticky-carpeted venues sweating with a bunch of strangers while the band on stage contorts, rages and hurls abuse at adoring fans.

American photographer Michael Grecco’s latest book Punk Post Punk New Wave: Onstage, Backstage, In Your Face, 1978-1991 is a visceral reminder of what freedom looks like. It also reminds us of the power of music in lifting a collective finger at authority! As Grecco writes, the punk era was a moment without boundaries – “Wear what you want! Say what you want! Make music however you want!”

Through 300 colour and black and white images, Grecco takes us on a rollicking ride into the underground music scene of the seventies and eighties in Boston, the location of the Tea Party uprising. One could draw parallels between the protesters of 1773 who were railing against the tyranny of the Brits and the punks in their defiance, but it is safe to presume the punks had way more fun while they were sticking it to the establishment.

A native New Yorker, Grecco was 18 years old when he picked up his 35mm camera and headed into the Boston clubs, where he photographed many artists that would go on to become icons of the genre such as The Sex Pistols, Lene Lovich, Billy Idol, The Clash, Adam Ant, Talking Heads, The Dead Kennedys and The Ramones.

As Boston music critic Jim Sullivan writes in the book’s introduction, Boston was “a microcosm for a youthquake that was happening in cities across America, England and Europe.” In Australia, we also embraced the punk movement and many of the bands Grecco photographed in Boston made their way to Oz. In this way, Boston mirrored cities around the world where in any one week you could see multiple bands at multiple venues often in the same night! Live music gave cities their heartbeat.

The trajectory of this musical era is captured in Grecco’s pictures that move through punk’s visceral scream to the avantgarde post punk/new wave era. Through this transition bands like Devo (Whip It), Bow Wow Wow (I Want Candy), Talking Heads (Psycho Killer) and solo artists like Joe Jackson (Is She Really Going Out With Him?) made their stand.

In those hedonistic days, Grecco became part of the scene and was given unprecedented access to shoot onstage and capture the behind the scenes shenanigans. This is one of the appeals of the book, the opportunity to see the artists on and offstage, in performance mode, and partying like there was no tomorrow.

These days you are lucky if you can shoot the first three songs of a gig from the back of the venue with a zoom lens. Artists and their management are far more precious than the punk era when a topless Wendy O of The Plasmatics or a butt-naked Lux Interior from The Cramps didn’t care which angle they were shot from while thrashing around the stage. With no restrictions, Grecco was free to shoot up close and often literally on the stage. The energy in his pictures is palpable, as is the potential danger. In these frenzied moments, the sense that anything could happen (and often did) comes through loud and clear.

Segmented by venue, this collection of pictures has “never been seen before,” says Grecco. The book captures the zeitgeist of what was one of the wildest rides in music history in both pictures and personal anecdotes, a combination that gives a unique perspective. At The Rat, one of the punk clubs, and Boston’s equivalent to New York City’s CBGB, Grecco recalls “sometimes, there were real rats scurrying about the place!” He also shares how he narrowly missed being hit in the head by a metal milk crate thrown by his mate Billy Idol (who had the sexiest snarl in the business). And then there was his crib where he painted all the walls “dark blue so it would always be night.” These are some of the less outrageous anecdotes. In his brutal honesty, and with humour, Grecco shares recollections that leave no doubt this was a time when anything goes (you’ll have to buy the book to read the more salacious tales).

Punk was a means of self-expression for artists and their fans, a way of connecting with others who wanted to challenge the status quo, and it was not for the faint-hearted. As Fred Schneider from the B-52s writes in the book, there was plenty of gross behaviour and acting out. Being spat on by the punters was par for the course.

Punk Post Punk New Wave is a timely reminder of the power of live music and also the role of photography in capturing the essence of a generation. Looking back at these pictures reinforces why artistic expression in all its forms is the heart and soul of a society. As Sullivan writes, Grecco’s book “will transport you right back to those days. Or, perhaps, escort you there for the first time.” Either way, you won’t be disappointed.