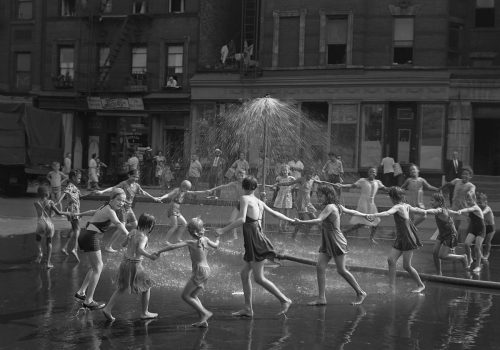 Published by Thames & Hudson, the book entitled I See a City: Todd Webb’s New York focuses on the work of American photographer Todd Webb produced in the megapol in the 1940s and 1950s. It is a rich portrait of the everyday life and architecture of New York, shaped by the friction and frisson of humanity.

In November of 1945, Todd Webb began a journey that would change his life. Newly discharged from the Navy, he resolved to move to New York City and give himself over to his passion for photography. It was time for him to test his mettle,to see if he had what it took to become more than just a hobbyist. Ultimately, Webb proved up to the challenge he set for himself: photography became not just a vocation, but his life’s calling. New York after World War II was the center of American culture, a cauldron of creativity and a place where modernism rubbed shoulders with the old world. It was also the “capital” of photography home to many of the country’s preeminent practitioners as well as some of the leading pictorial magazines and journals that published on a weekly basis. The city, both intellectually and visually, provided everything that an ambitious person needed to remake himself. For several years, Webb photographed the city intensely, getting to know its distinct neighborhoods intimately. This was his first mature body of work and the launching point for a career as an internationally known and respected photographer.

Webb was forty years old when he moved to New York and had already experienced much in life. Prior to his three years of enlistment during the war, Webb had been a stockbroker until the crash of 1929 and the subsequent Great Depression; he prospected for gold several times in California, Mexico, and Panama; he was a surveyor for the United States Forest Service; and he worked for the Chrysler Corporation in his hometown of Detroit. It was in Detroit that Webb’s serious interest in photography began. In 1940 he joined the Detroit Camera Guild and the Chrysler Camera Club, where he befriended Harry Callahan. The younger, but more experienced, Art Siegel also became a close comrade, and Webb learned a great deal from their informal get-togethers. He also took an inspirational ten-day master class with Ansel Adams, stating, “The enthusiasm generated by Ansel’s visit made photography something we had to do, not just wanted to do.”

Webb moved into a small apartment on 123rd Street near Amsterdam Avenue (on the northern edge of Morningside Heights) along with his friend Callahan and Callahan’s wife, Eleanor. The living quarters were tight and the furnishings Spartan—Webb slept on a roll-out cot in the kitchen, a situation probably not too different from his military days—but they managed to build a tiny darkroom in a closet. Callahan had brought Webb’s 5×7 Deardorff large-format camera from Detroit, and although film was scarce (the war effort had led to a shortage of silver), Webb managed to find enough to hit the streets right away. At the same time, he began to keep a journal, and his entries, along with the early photographs, reveal a wide-eyed newcomer’s experience of the city. Though he was fully immersed in the city, he sometimes struggled to get it down on film:

“The light was beautiful and I was full of New York. I took the subway down to the Village at Houston Street, walked east to Mulberry Street and made a few negatives en route. I had never worked down there and I was excited by a new view of New York. On Mott and Mulberry Streets, north of Chinatown, the streets are literally teeming. There are street markets, pushcarts parked end to end in front of endless rows of small stores. Both the stores and the pushcarts sell fruits, vegetables, neckties, fish, and everything under the sun. The smells, the noise, and the whole feel of the place are just not describable and I couldn’t photograph it. But I want to go back and try.”

Among Webb’s earliest successes were his photographs of the “Welcome Home” signs displayed around the city in support of the men and women returning from the war. Both handmade and mass-produced, the signs were mounted above doorways or in windows, with messages like “Welcome Home Jim & Henry” or “Welcome Home G.I. Joe.” As a veteran living apart from his family, it is understandable why he would create a sensitive series of photographs documenting the outpouring of emotion for returning loved ones. These signs became a way for him to personally connect with, and become a part of, the city. While reflecting on photographing in the Lower East Side, Webb wrote in his journal: “You see more American Flags displayed down there than anyplace else I know of. They sent a lot of boys to war as evidenced by the Honor Rolls that each neighborhood displays lots of gold stars too. I think of the boys I knew in the service that were from New York I understand them better now.” The doorways and surrounding architecture reflected the character of the people of the neighborhoods.

By the end of 1945, Webb had photographed storefront churches and shops, street scenes viewed from the railway station platforms of the Third Avenue Elevated line, and the Third Avenue streetcar at 125th Street (subsequent attempts proved more fruitful). In these early New York pictures, there is an evident image-making strategy that persists throughout his New York work of the late 1940s, and even in his photographs of Paris in the 1950s. Webb consistently employed four frameworks in his picture making: architectural storefront views; details of architecture, graffiti, or signage; street views with people as the focus and the city’s architectural curtain as backdrop; and, occasionally, skyline views with a grandeur evoking the “mythic city.”

The reputation of the Lower East Side as the epicenter of street life in New York was well established by the time Webb arrived in 1945, but he was also eager to record his own experience of the atmosphere on film. In his journals he wrote: “The buildings are old and they wear their years with an air. The layer on layer of paint on the storefronts give a good feeling to the eye. It is a section with a great lived-in feeling. The people are mostly poor, I think, but somehow they have a dignity that you do not expect to find with poverty. Even the kids seem to be proud. It seems to be an area of different ethnic groups. I saw Spanish stores, Greek coffee houses, and Italian and Polish shopping centers.”

In New York, about twice a week, Webb would visit Stieglitz at An American Place. He regarded Stieglitz as a mentor and a source of profound inspiration, not only because of the older man’s own photographic work, but for the greater understanding and appreciation of art that the two men shared. Stieglitz spent hours looking at Webb’s work while sharing photographs he had created over his own long career, from the early Camera Work era material to the later Lake George photographs.

There is a natural temptation to compare Todd Webb’s New York work with that of Abbott’s massive Changing New York project of the 1930s. The two were close friends, with a standing weekly lunch date, and Webb certainly knew her work intimately. Indeed, there are some similarities: both Abbott and Webb were interested in documenting the changing city with their own artistic viewpoint, and both mainly used large-format cameras. But the way they approached their sub- jects was quite different. Webb focused more on capturing the last vestiges of old New York and was not nearly as interested as Abbott in the juxtaposition of the old and new. Webb’s primarily concern was the human presence in the city even when there might not be an actual person in the frame. In his statement for the Diogenes with a Camera II exhibition, he wrote, “Often, I find subject matter with no visible persons to be more peopled than the crowded street scene. Every window, doorway, street building, every mark on a wall, every sign, has a human connotation. All are signs and symbols of people—a way of life—living in our time.” In this sense, Webb was likely more influenced by the work of Eugène Atget, whose work Abbott introduced him to soon after they met.

In 1949, Webb moved to Paris and dedicated himself to photographing that city much as he had done in New York. The result is a remarkable body of work that he produced while still taking occasional assignments for Stryker. After four years in France, where he also met and married his wife, Lucille, Webb returned to New York in 1953 and won a Guggenheim Fellowship two years later to make a cross-country trek photographing on foot. He was awarded a continuation of his fellowship in 1956. At the end of 1959, the Webbs decided to leave New York for the calm and affordability of New Mexico, ending this deliriously prolific chapter in Todd Webb’s photographic career.

Sean Corcoran is the Curator of Prints and Photographs at Museum of the City of New York. He lives and works in New York, USA.