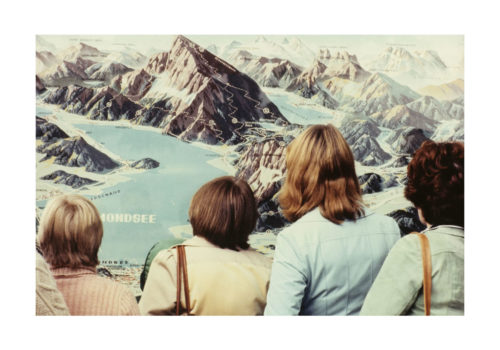 ILLUMInazioni – ILLUMInations, the 54th International Art Exhibition directed by Bice Curiger and organized by La Biennale di Venezia under the presidency of Paolo Baratta, took place in the Giardini and in the Arsenale, forming a single itinerary, featuring 83 artists from all over the world, including 32 young artists born after 1975, as well as 32 women artists.

ILLUMInations emphasizes the intuitive insight and the illumination of thought that is fostered by an encounter with art and its ability to sharpen the tools of perception – the director underlined.

Among the artists chosen for her show, Ms. Curiger presents two master photographers such as Luigi Ghirri and David Goldblatt.

Luigi Ghirri, who died in 1992, had an exquisite sense of light and composition and his studies of everyday scenes in provincial Italy are miniature masterpieces. It’s a “tribute” to Luigi Ghirri who revolutionized Italian photography in the ’70s with his fresh color snap-shot style observations of Italian contemporary culture. His small delicately colored prints were conceived in series to create visual and direct poems.
His work possesses a witty and worldly sensibility that is purely his own and anticipates the work of some contemporary photographers. After 1980 and until his death Ghirri worked primarily with landscape and architecture.

The veteran South African photographer David Goldblatt is represented by two extraordinarily intense sequences of photographs of Johannesburg that he has been chronicling for decades. One of housing seen from the air and the other of “ex-offenders,” criminals he has brought back to the scenes of their often violent crimes to take their portraits. David Goldblatt has since the ´60s managed like few others to illustrate social change in his country.

David Goldblatt won the Henri Cartier-Bresson Award for 2009 and the Kraszna-Krausz Best Photography Book Award 2011 for TJ & Double Negative. The book , published by Contrasto, combines Goldblatt’s historic images of Johannesburg with Ivan Vladislavic’s novel, Double Negative, about a young man living in Johannesburg and learning about observation from a photographer. The resulting project describes a difficult metropolis scarred by the history of apartheid, symbolic of contemporary South Africa.

Some of the exhibitions of ILLUMInazioni are focused on very young artists who work with photography. “It is now a younger generation that is offering innovative insight into the use and reflection of the medium of photography. One might have thought that all has been said after Jeff Wall, or the Düsseldorf School with Andreas Gursky, Thomas Ruff and Thomas Struth, or after Wolfgang Tillmans, but these younger artists show us that there is still a lot to say.” Said the artistic director.

One of these artists is Yto Barrada (born in 1971 in Paris). Barrada is a visual artist living and working in Tangier, Morocco. For more than a decade, his work has engaged with the social and political realities of North Africa. She is in Venice with her installation called The Telephone Books (or the Recipe Books) showing the notebooks used by Barrada’s illiterate grandmother who created her own system of communication with her familty through images and symbols.

Established in 2004 by the artists Ji Weiyu (Shanghai, 1979) and Song Tao (Shanghai 1980), Birdhead is a collaborative unit that uses photography to explore the social and built landscape of contemporary Shanghai and the artists’ physical relations to that environment.
Birdhead’s oeuvre consists of series of photographs, called albums, that present everyday images of urban life in Shanghai. The artists, who grew up in the 80s when mass urbanization began in China, address the frantic pace of development and change in the city.
For Venice they have chosen Xin Ciji’s poem, shown in two parts, Song Poetry – Writing on the Wall along the Path to Bo Mountain, and a separate installation of over 200 photographs. The photographs are selected from those that they have taken from 2004 to the present. They are arranged on the wall in an orderly grid. The associations between each photograph manifest different moods, from joy to sorrow to tranquility to anger, and the significance of the poem and the atmospheres contained in all the photos on display form a complete presentation.

On the occasion of the 54th Exhibition, an online competition is launched through the website La Biennale Channel, for the best photograph of the Exhibition (competition open only to accredited photographers).