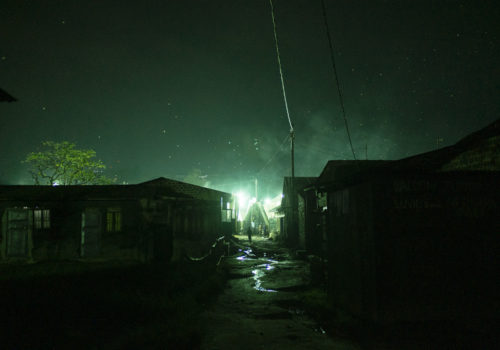 Eugénie Baccot received the IWPA 2022 Canon Award for her series Nsenene Paradise. She presents her work with this text:

During the rainy season, Kampala, the Ugandan capital, takes on a lunar appearance. In spring and fall, stridulating green swarms cross the skies. Grasshoppers, the nsenene as they are called in Luganda invade the country to breed and feed. The season of grasshoppers create jubilation. Picked up during the night, the hazelnut-flavoured orthopterans are sold cooked in the early morning on the markets for less than 2 euros a bag.

Dazzled by the light and dazed by the pungent smell of thick smoke emanating from the braziers where plastics and twigs are burned, the locusts rush into the traps. They are thousands, millions to twirl in the sky, picked still alive by skilful hunters.

Just as dazzled, the hunters put on their sunglasses in the middle of the night. Some have already burned their retinas.

For several years  the clouds have been less frequent and smaller. However, the arrival of the locusts is crucial. Rich in minerals, iron and protein, edible insects feed millions of humans. The United Nations Food and Agriculture Organization has also decreed the insect as a future source of food for humans.

The intensive exploitation of these open-air farms has led to a drop in the population of insects collected by thousands of tons. The situation today is critical.

Climate changes that make the coming of rains unpredictable affect the behavior of confused insects. Their natural habitat has been partly destroyed by the mass cultivation of palm trees or sugar cane. Hungry, the nsenene became pests capable of ransacking a field of grain in minutes.

Formerly traditional, hunting has become massive. The traps have given way to huge futuristic farms. Will the needs of protein of a growing population be the cause of the programmed disappearance of the grasshoppers?

Biography
As a photographic author my  approach has a strong narrative character it is a documentary, highly human approach of the subjects to which I devote myself in France or abroad.
Freelance photographer based in France, I am interested in man in his environment. I carry out reporting trips during which I document the daily life of unconventional or alternative communities, sometimes linked to questions of identity and their representations. My committed photographic imprint is halfway between photojournalism and author photography.
This process requires a lot of time and empathy; I believe that to document the life of others, it is necessary above all to take the time to know them.
My personal editorial projects and assignments are published in the French and international press The Washington Post, GEO, Stern, D La Repubblica, Days Japan, Newsweek Japan, Vanity Fair, Paris Match, Le Figaro Madame, Le Monde, Le Monde des Religions, Liberation, Le Parisien, L’Obs, L’Express.

I am part of the international network of women photographers Women Photograph.