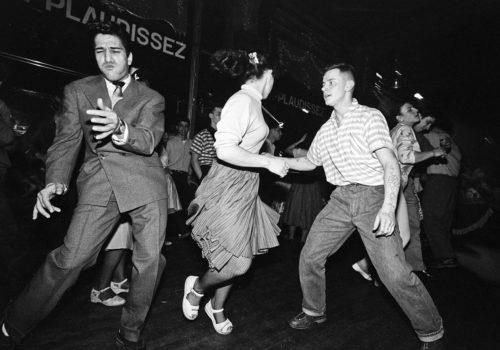 The 110 Galerie presents the exhibition La Gazette de BizBiz by Alain Bizos. The exhibition has been thought of as a diary: a world tour on a Solex moped  with the objective of someone who defines himself as an “artist-reporter-photographer”.

Alain Bizos shared his career between Liberation and the photo agency VU’, the group of graphic designers Bazooka or even Actuel, the monthly magazine “New and interesting” and thus positioned his work on a stretched thread between the fields of art and information. Since the 1970s, he has been claiming an activist and committed art with humor and derision as weapons. From the robberies of 1971 accompanied by certificates of concealment to the collages of his Gazette, a pseudo-communist parody published on Instagram during the confinements of the last two years, passing through two black and white series from the 80s – The Anti-Racist March for equality in 1983 and a tribute to the young partygoers of the Grands Boulevards – the exhibition paints the portrait of a personal work with strong political content, heterogeneous and original but also ferociously funny.

Alain Bizos
Born in Paris in 1947, student at the National School of Fine Arts, painting section and at the school of the Louvre in Art History.

It was in 1969 following his meeting with the visual artist Arman, whose assistant he became, that he moved to New York. He then produced conceptual photographic sequences, such as “Forbidden Spaces” or “Qualified Flights” which he showed at the Green Street Gallery in New York in 1970, and at the Ferrero Gallery in Nice in 1972, his first personal exhibitions.

Frequently going back and forth between New York and France, he participated in the creation of the daily Liberation in 1973, became friends with the group of young graphic designers Bazooka and in 1977 he was editor of the monthly Un regard moderne.

In 1979, it was at the request of Jean-François Bizot that he returned to France to participate as an “artist-reporter-photographer” in the launch of Actuel, the monthly “New and interesting”. His quirky portraits and his reports in the form of “photo stories” marked the visual identity of the monthly magazine with his original treatment of color and framing.

In 1986, Christian Caujolle, then head of the Liberation photo department, asked him to join him when the Agence Vu’ was created. Alain Bizos left the Agence Vu’ in 2015 and continued his work as a freelance photographer.