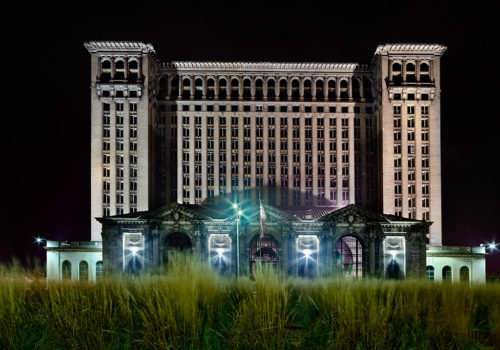 Dark City includes photographs by Lynn Saville taken across the US, as well as around New York City and an introduction by acclaimed author Geoff Dyer. Arthur Danto has described Lynn Saville as New York’s answer to Eugène Atget, because she « prowls her city at the other end of the day, picking up pieces of the past in the present, just before it is swallowed by shadows. » For her new monograph, Dark City, Saville focused on vacant spaces – shuttered storefronts, back alleys, blank billboards, empty lots – with the occasional ghostly figure hurrying through the frame. Working at twilight and dawn with a medium-format camera (setting up her tripod quickly so as not to attract police attention), Saville captured busy city streets de-populated and emptied out, industrial spaces and storefronts alike gone quiet. Colour and light come from the sky, streetlights, neon signs or surveillance lighting. Seemingly otherworldly, the images in Dark City also tell a more pragmatic story of the changing urban landscape – vacancies caused by financial crisis, and construction projects spurred on by economic recovery, gentrification and development.

Lynn Saville is a New York-based fine-art photographer who specializes in photographs taken at twilight and dawn – « the boundary times between night and day, » as she calls them. Saville studied at the Pratt Institute and Duke University. Her two previous monographs are Acquainted With the Night (Rizzoli, 1997) and Night/Shift (Random House/Monacelli, 2009).  Her work is represented by the Yancey Richardson Gallery in New York and is in the permanent art collections of major museums, corporations, and individuals. She lives in New York City with her husband, the poet Philip Fried.