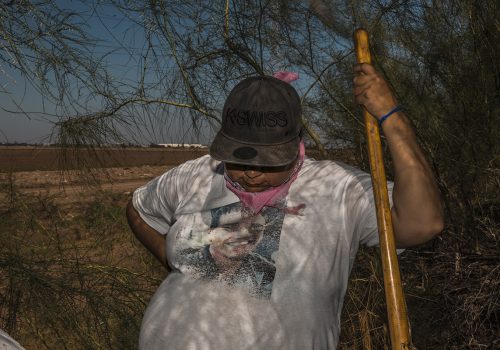 Yael Martínez – The House that Bleeds

It was getting dark when I got the call, my feet froze, Luz my wife was telling me that they had killed my brother-in-law- Beto, she was uncontrollable, I had never heard her speak like that, her voice was shaking, it was breaking… That day totally changed our life… I could not sleep all night, images shot up in my head and my mouth was dry; I fell asleep and an image came to my mind. It was me in a desolate, mutilated place … I woke up with tears in my eyes, “Beto was killed, hanged” was what resonated in my head, “he was beaten, burned, but they told us that he committed suicide.” David and Nacho had been missing for more than 3 months and Beto was killed in jail.

After these events in 2013, I began to document my family and the families of other missing people in Mexico.

Across Mexico, more than 37,400 people have been categorized as ‘missing’ by official sources. The vast majority of those are believed to be dead–victims of ongoing violence that has claimed more than 250,000 lives since 2006. These disappearances are the source of lasting psychological trauma for families left behind.

My work focuses on communities fractured by organized crime, in a physical and psychological sense. I am trying to represent the relationship of absence and presence and this state of invisibility in a symbolic manner. The symbolic construction of the territory where violence penetrate all and this violence crosses the physical and spiritual space of those who inhabit it.

I try to use the title in a symbolic way, as a core structure. To talk about an intimate aspect and the historic moment that the country is living, in which the wounds of these tragedies seem not to be allowed to heal and continue to open and bleed. The house as metaphor that can be the body of a person, a community or a country.

I propose to develop a final chapter of this long-term work with a group of mothers from the state of Sinaloa. Las rastreadoras del fuerte (The trackers of the fort) a group of women who are challenging all power structures (social, cultural and political) in order to find their loved ones.

My goal is to constitute in a documentary essay a historical memory as a substantial way to face the violence of a power that not only destroys the body, stifles life and controls existence. A power that seeks to disappear even the memory of the other, of his victim. A Social memory that has been wounded by the absence, uncertainty and pain, where all this violence and impunity are the cause of the unraveling of Mexico´s social fabric. – Yael Martínez

He is  currently a fellow of the Photography and Social Justice Program of The Magnum Foundation. He won the  2nd Prize of the World Press Photo  contests 2019 in the category of long term projects. Was selected in the Program 6×6 global talent Nort- Central America of the World Press Photo in 2018. Was grantee of the Magnum Foundation in the grants: Emergency Fund  and On Religion in 2016- 2017.

He was named one of PDN’s (Photo district News) “30 New and Emerging Photographers to Watch” in 2017. In 2015 he was selected for the Joop Swart Master Class of Latin America; He was a finalist for the Eugene Smith memorial grant in 2015 and 2016; and He was nominated for the Paul Huf Award (FOAM Netherland 2017, 2018), The Prix Pictet, The ICP Infinity Awards and Tim Hetherington  Trust / The Visionary Award.

His work has been featured in solo and group shows in America, Europe, Africa and Asia.