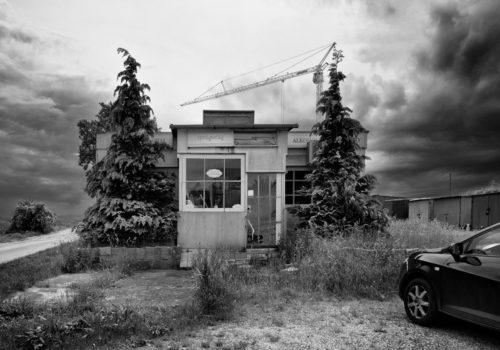 The Big Dream of Small Towns
Blocks – complexes of apartments connected by a common spatial structure, in larger agglomerations functioning as blocks of flats. Their construction, supported in the communist-ruled Poland, was a sign of progress, especially since before the war. At that time small towns were most often a cluster of destroyed cottages. In the seventies, blocks became a synonym of development and big-city success. In small towns they appeared as a sign of striving for something great, they were supposed to be a witness of development and a way to show “we are great too”, “the present day also reaches us”.Their construction brought the inhabitants closer to the “big world”, the dwellings of big slabs, a kind of “status quo” in the city tissue. Life in the apartment showed a new way of progressing in thinking, put that people up of the previous generation. When the political situation has changed, status of block also change. They started to be more like a relic of the past, embarrassing thing which will be degrade and disappear from the towns maps. However, it did not happen, people still live there, successive generations adapt the space of blocks in small towns anew. Sometimes patching up the surroundings with arduousness, using the means at their disposal, sometimes thanks to money from the commune. Regardless of the method of modernization of the living space and the surrounding infrastructure, it shows the human approach to “home” as a place to live.That’s why, the photo project “The Big Dream of Small Towns” is a story about a place that is so tamed by us that it seems to be ordinary and safe. A space that goes unnoticed because it’s as obvious as our life in it. But let’s try to look at the blocks again. And so the first photos show them from a distance. Their lumpy, geometric form emerges slowly in the frame. We are getting closer to it, starting to see the details. Anonymous squares of windows, the rhythm of the architect’s idea, fragments of roads or greenery, slowly revealing the individual approach of each of the residents. Curtains in the windows, pots with flowers, sometimes a shadow of figures hidden behind glass. Then we realize that on the other side there are people for whom the space we look at from the other side of the lens of camera is something identical with their lifestyle or preferences. Similarly, staircases, entrances to them, letters sticking out of boxes or even inscriptions painted spontaneously with sprays become information about the inhabitants.Going further, starting from the block structure itself, you can see the entire infrastructure of the estate or a group of several buildings. We see booths in which it was decided to create a grocery store, a pub, a hairdresser, a nursing home, cooperatives, everything that a person may need to make life comfortable. Mailboxes, basketball baskets, outdoor gyms, benches for seniors, places where you can relax among the trees draw attention to the multigenerational nature of the inhabitants. In the end, we see posters advertising of big stores, placed like in big cities on the smooth walls of blocks, shouting “you can do it too”.Then, the prose of life appears. Cemeteries squeezed between blocks, next to supermarkets, being a kind of “memento mori” do not let you forget about the fragility of the inhabitants. However, life goes on, the meshes installed during the insulation of blocks of flats, the construction of new apartments and new decorativeness change the face of small estates. The need to add individualism appears on blocks, on smooth surfaces of walls without windows, where we see geometric patterns (Piet Mondrian’s paintings for exemple) or references to the region. This industrial decorativeness, so identical with the places, shows the strong relationship between the residents and the block of flats. It also shows pride in the place of residence. The photos in which these fragments of architecture appear become lyrical, sometimes nostalgic. They are like an “August afternoon”- create a warm atmosphere and a sense of security. They seem to say: We are fine here!
Wojciech karliński

The entire project can be seen on the website:
https://bigsleep.myportfolio.com/