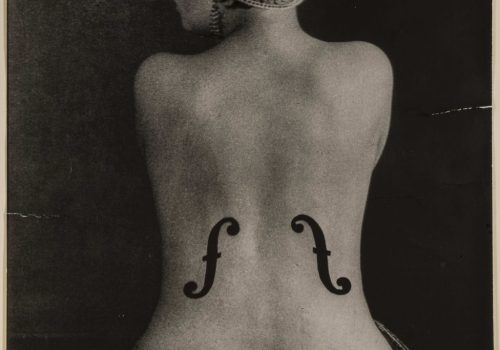 WO | MAN RAY. Le seduzioni della fotografia (The seduction of photography), with its two hundred photographs, is on stage at Camera – Centro Italiano per la Fotografia, in Turin, paying homage to a master of the20th century. The images, produced from the 1920s in Paris until his death (in 1976), are connected by the “fil rouge” of the feminine figure as a source of inspiration for his poetics. Indeed, along with Man Ray, we find Berenice Abbott, Lee Miller, Meret Oppenheim, Dora Maar as well as Nusch Éluard, Juliet (his last wife) and various other female artists, friends, models and companions, including the 1920s and ’30s leading female protagonists of Paris, like as Gertrude Stein or Sylvia Beach.

In various ways, they were all linked to Emmanuel Radnitzky, best known as Man Ray, who reached Paris in 1921, preceded by his fame as the ‘New York Dadaist’, introduced by Marcel Duchamp, himself a friend of Tristan Tzara.

Many of these women were also great artists and the exhibition also focuses on this aspect, displaying their artworks from the 1930s and ‘40s, the period they were most directly in contact with Man Ray and the Dada and Surrealist avant-garde environment in Paris.

The late 1920s and the next decade were the period when the totalitarian regimes rose, but il was also a period of great artistic turmoil and libertarian instances. Man Ray became a protagonist of the Dadaist season and then of Surrealism. He also was the favourite portraitist of the intellectual circles of Paris and a sought-after fashion photographer; he also created ‘rayographs’ and ‘solarisations’, two technical processes that became emblems of photographic invention in 20th-century avant-garde movements.

In this respect, Paris was the world capital of the social and cultural change that was developing within the ateliers, the cafes and the bohemian cabaret as meeting points for artists, writers and creative people. This very context was described nicely by Berenice Abbott, who portrayed its protagonists (Eugène Atget, Jean Cocteau, André Gide and James Joyce, only to mention a few) within Man Ray’s atelier. Lee Miller would herself become a protagonist of fashion photography and photojournalism in her own right in the 1930s and ’40s.

“The WO | MAN RAY exhibition at Camera, besides offering the public the vision of the works by a great maestro from the history of 20th-century photography, also reflects a still pressing theme, namely that of the role of women within every area of society, including the one of the arts”, Emanuele Chieli, president of CAMERA says.

“While everyone knows Man Ray, his nudes characterised by sensual eroticism, both provocative and playful, the story of the women who collaborated, lived and argued with him, who learnt from him, and who turned out to be just as much protagonists of the worldwide art and photography scene is not so well known. In this new perspective, we recreate an environment and tell a story largely unknown to many”, the director of CAMERA, Walter Guadagnini adds.

The exhibition, curated by Walter Guadagnini and Giangavino Pazzola (catalogue published by Silvana Editoriale), was made posssible thanks to the collaboration with national and international institutions and galleries, from the CSAC – Study Centre and Archive of Communication of Parma University – to the ASAC – Historical Archive of the Venice Biennale – from the Lee Miller Archive of Sussex, to the Mast in Bologna and the Fondazione Marconi in Milan.