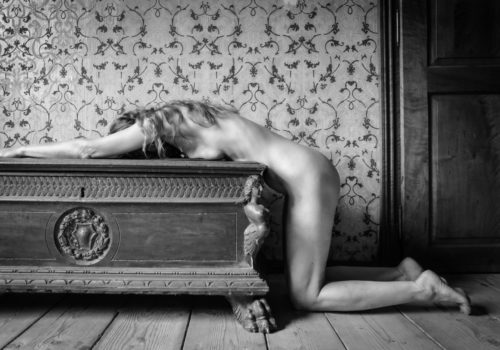 Musa Erato is the long-term project by photographer couple Thomas and Petra Gerwers. Hunting extraordinary locations where they can let their photographic ideas unfold for new mutual creations has been their passion for years.

While he wields the camera, she enacts visions oscillating between nude, portrait, and still life photography. To learn more about what sparked this creative collaboration and how it evolved, we sat down and spoke about this series – and what’s new.

Nadine Dinter: Thomas, you are best known as “Mr. ProfiFoto” as the editor-in-chief of one of Germany’s most renowned photography magazines. What’s your own story as a photographer?

Thomas Gerwers: I originally wanted to be a photographer, but my father advised me against it because photography seemed to be an unprofitable art. I then took bitter revenge for this by making another unprofitable art my profession, namely that of journalism, and that, of all things, for the unprofitable artists in the photo scene.

For many years, I neglected my own photography. It was only through my partnership with a photographer that I found my way back to it, and I enjoy very much not being subject to any professional profit motives with it. I call it “cultivated photography” because it doesn’t have to serve any purpose. At the same time, I have been seeking publicity for some of my work for a while through exhibitions and publications. In doing so, I realize that there really doesn’t have to be a conflict of interest between conveying photography as a journalist and my own photography, even though there are certainly people who find this irritating. But by now, I’m too old to want to please everyone.

What’s your secret to balancing creativity with your work as a magazine maker? Would you say that your creative mind gives you a different perspective when looking at other photographers’ work?

TG: One benefits from the other. Because I have been confronted with vast amounts of mostly excellent photography for about three decades, and because I am allowed to classify and partly also evaluate it, my perception has undergone a kind of long-term training. Not every photograph that I present in my capacity as a magazine maker has to appeal to me personally. It is enough that it has relevance. At the same time, I naturally have personal preferences for certain oeuvres, photographers, stylistic elements, and subjects. These preferences play a significant role in my own photography. I experiment with them and use this treasure trove of experience to find my images.

Together with your wife Petra, you have created a very intimate yet classical series called Musa Erato. Tell us more about its origins and how you came up with the title.

TG: As I mentioned earlier, my partnership with Petra led to a revival of my photography. Erato is one of the nine muses in Greek mythology, the patron goddesses of the arts, who spurs people on to creative achievements as a source of inspiration. This also applies to Petra because she not only inspires me but also serves as a model for my work.

It is a long-term collaborative project in which her share is at least 50 percent. We are not simply interested in depicting nudity. My photos are not meant to show how something looks but how it feels at the moment of the shot. Many photographers miss telling the story because, visually, the nudity is all you see in their pictures. What is different about ours is that the story is very apparent. Petra is a beautiful woman, but I try to capture more than that, which is her essence.

Petra, you are a photographer and work as an online editor. With the joint project Musa Erato, you are not behind the camera but in front of it. What does this series mean to you?

Petra Gerwers: We have been a couple for ten years, and our first photos were taken rather casually. I felt the loving eye on me in them. I liked myself in the photos, so the process toward our joint project was not a leap into the dark but rather the result of a shared development process. I really enjoy being in front of the camera when the conditions are right. Of course, our trusting relationship and the certainty of being able to influence what happens with the pictures help. Also, as a photographer, it is not difficult for me to become involved with an idea for a picture. Sometimes I am the one who develops and suggests the ideas. It’s like a dance, our collaboration.

How is the project structured? Would you like to share some more insights about location scouting and the decisions behind the images that are published, posted, and exhibited? Also, what about the degree of nudity they depict?

PG: We consult with each other on all of these issues. As far as locations are concerned, whether a place is inspiring is not least a question of the energies that emanate from it. When it comes to editing, I definitely claim the right of veto, although the boundaries are quite broad. But yes, there are pictures in which I don’t like myself. But that has nothing to do with the degree of nudity. That always depends on whether the nudity is relevant to the storytelling.

How many images have you shot and compiled for the series so far? What is your most inspiring location so far? And what’s still on your list?

TG: Ultimately, the challenge is not so much taking photos as editing the right ones. Filtering out the essence from thousands of photos can quickly become overwhelming. Here, too, we support each other. And the perspective on the selection is subject to constant change. The more extensive the project grows, the clearer it becomes which motifs are more important than others.

Out of thousands of shots, maybe around 150 have made it onto our shortlist, which has to be re-edited depending on the type of presentation, as is now the case for L’Oeil de la Photographie.

The search for inspiring locations is an exciting challenge because the atmosphere of a place plays a major role. For us, it is always about the staging in the space; both have an interaction. Perhaps the most exciting place where we have photographed is an old palazzo in northern Italy with a lot of patina and fantastic light.

Places like that always find us, but it’s not easy. Many places have their soul taken away by over-restoration. There is no energy flowing there, and that is important, both for the photographs and for the effect of the pictures on the viewer. The next location on our list is a friend’s flat, which is full of animal trophies: a polar bear stands next to a zebra and an ostrich. Anyone who wants to offer us unusual locations is welcome to contact us!

After presentations in Arles, you are currently showing a selection from Musa Erato during the Photo Popup Fair (PPUF) in Dusseldorf. Have you noted a different reaction from the German audience compared to the French visitors last year?

TG: An interesting question. I don’t think there are national differences in the reception of images within Europe. It rather depends on the way of presentation and is in the eye of the beholder. Therefore: next question, please.

Petra, has your role as the model in your Musa Erato series changed how you see yourself as a woman or photographer? Have there been times when you had doubts about whether to present these photographs to the public?

PG: No, on the contrary. I was the one who suggested developing a joint project from his photos of me, which we would exhibit and publish as a book. Seeing myself like this in these photos helped me, in a way, to come to terms with myself as a mature woman. But it is not primarily about seeing me naked but about the feeling that the photos convey to the viewer.

Thomas, would you say your images of Petra are like a personal love letter to your wife or merely a poetic and photographic depiction of your love?

TG: I do hope that you can tell from the pictures that she is being photographed by someone who loves her and, therefore, gets to show a very intimate side of her. I don’t mean her nudity. I mean that we see a woman’s most intimate feelings.

What’s your advice to other couples who want to create a series together? Are there do’s and don’ts you have encountered during the process?

TG: That is difficult to answer. As a photographer, you have to connect with what you are photographing. Just as important as what happens in front of the camera is what happens behind it. Your attitude is reflected in the photos. Photography that has a certain quality never just remains on the surface. Regardless of the relationship between photographer and model, both have to be authentically involved and willing to open up. Otherwise, a picture only sounds but doesn’t resonate.

You published a book with images from the project, which has since sold out. Will there be a sequel?

TG: There will certainly be a second book at some point, which will contain the essence of the project in an expanded form. At the moment, however, nothing specific is planned. Instead, we offer prints of selected works in limited editions. At the current Photo Popup Fair, we are presenting a portfolio edition containing ten pictures as original prints. I am also following with great interest the rapid development of the NFT market, which offers exciting opportunities for photographers in particular. Here, too, I plan to be present with images from the series.

Images from the Musa Erato series will be shown at PHOTO POPUP FAIR No 8 at Stilwerk Düsseldorf (Germany) from the 14th to the 22nd of May 2022 (http://photopopupfair.de).