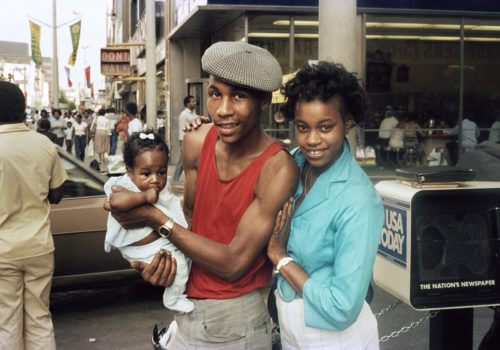 Jamel Shabazz’s images are iconic, filled with great vibes, street styles, and legendary tunes from the “good old days.”
In 2016, I had the pleasure of working with Jamel Shabazz for the first time. We kept in touch as more book and exhibition projects at Galerie Bene Taschen followed in the years after. Now that he has a new show at his gallery in Cologne, Jamel and I decided to do a proper recap, talking about his beginnings and also “what’s new.”

Nadine Dinter: Photography and fashion trends come and go, but your vision remains as evocative and iconic as ever. What is your take on the hyper-dynamic, ever-changing development of these two inspirational realms?
Jamel Shabazz : With the evolution and introduction of digital photography over the past 20 years, I have witnessed a profound increase in the craft for many people who now embrace photography, both as a hobby and profession. Social media platforms like Instagram have provided a space where these creatives can now share their work in real time, and I am amazed at all of the great work I am seeing these days. In regard to the fashion element, I still pretty much love old school to the core and have not taken to a lot of the new ever-evolving fashion trends.

ND : Big brands you have been working with since the 1980s, like Adidas, are still around. How do you see your photographs contributing to their timeless appeal?
Jamel Shabazz : I have been very fortunate to work with a number of clothing brands over the years, and when I create work for each brand, I go into it with the mindset that I want to create an iconic image that goes far beyond the initial campaign. With each project, I have made some timeless images that not only represent the brand but also love, friendship, and creativity.

ND : You started out at a time when artists like Andy Warhol and Keith Haring were moving and shaking up the NYC art scene. Did you have a connection to those circles, or did you prefer to observe it from the outside?
Jamel Shabazz : I was relatively new to the art scene around the time that Andy and Keith were making headway. I traveled and documented many of the same areas they frequented during my days exploring Soho and the East and West Village and even saw them on a few occasions. At the time, I had no idea who they were and only really found out about them once they were gone. I have never been a part of any particular circle, as I tend to take the road less traveled and the majority of times, by myself. During the late 1990s, there was a brief shift when I started to work with a number of trendy magazines, so I started getting invited to parties and openings. I did enjoy those moments, but I decided to continue on course and pursue my own personal journey.

ND : You were born in Brooklyn but photographed in and outside of Manhattan. Is home really where the heart is? Which district do you like the most when it comes to taking photos nowadays?
Jamel Shabazz : Brooklyn will forever be in my heart, and it is the area that I photographed the most for the 45 years I have been shooting. Over the past 20 years, though, I have been doing a lot of traveling outside of the city and country, exploring new lands of opportunity and creating an entirely new body of work. Today, I favor traveling through upstate New York via the Hudson River and mountain regions. There is something about the wide-open natural landscape that comforts my soul. I have been navigating the city streets for most of my life, so as I settle down more these days, I prefer quieter places. Another area I have spent years photographing during the off-season is Jones Beach on Long Island. This spacious beach environment faces the Atlantic Ocean and is that go-to place when I want to escape the constant sounds of city life. There, I can also catch picturesque sunrises and sunsets while listening to the singing of the seagulls as they dance to the rhythm of the roaring ocean.

ND : Your photographs reflect not only the zeitgeist of the era in which they were taken but also a great deal of trust, comfort, and non-verbal harmony. How do you approach your subjects to catch them when they are at ease and happy to be photographed? Do you have a special way of initiating contact?
Jamel Shabazz : Great question! I have been using the same approach for well over 40 years, and it is about having a sincere heart with good intentions.  In the majority of cases and whenever feasible, I like to engage those I seek to photograph. I do this by first introducing myself, presenting a business card, making it clear that I don’t want any money whatsoever, and then sharing my work through a small portfolio that I always have with me. Once that trust and understanding are processed, I am able to document the moment. Upon completion of the task, I make it a point to give them a copy of the photo (usually through text or email.)

ND : Your work was recently shown at a pop-up gallery by your gallerist Bene Taschen in Los Angeles. How did the West Coast audience react to your works? Is there any sense of rivalry like in the music business, or are the messages you send through your photographs universal, transcending territorial parameters?
Jamel Shabazz : Since the opening of the exhibition, I have been receiving an enormous amount of direct messages from various social media platforms. A large number of them have come from folks on the West Coast that have a profound respect for my work, and to my surprise, many have been following the work for over 20 years. This exhibition allows them to see images for the very first time, up close and personal.

There is absolutely no rivalry at all. However, if the opportunity presented itself to show my 1980s photos alongside a photographer who documented the West Coast from the same era, I think that it would be an incredible exhibition, showing the parallel between the two coasts. Exhibiting internationally has allowed me to see just how much reach the work has, and I am so grateful for that.

ND : For your current show, “Photographs by Jamel Shabazz: 1980–1989,” at Taschen’s Cologne-based main gallery, you dived deep into your archives and put together a very special selection of photos. What can visitors expect to see?
Jamel Shabazz : Visitors will see images from a time that is long gone: a time before digital photography, crack, and Covid. The era in which these images were made was not perfect. However, for me, it represents moments when people were still able to communicate with each other and offer a simple smile without reservation.

ND : Many of your iconic images were taken in the New York City subway. How did you operate? Was there a special time you always rode the train and took the photos? Did you have a favorite train line?
Jamel Shabazz : Throughout much of my life, I worked in Manhattan and commuted to work each day, always having my camera out and set properly to capture any sudden moment that came my way. The overwhelming majority of my photographs were taken going to and from work, as I worked various shifts, from early morning tours starting at 4am to 9am, during the heart of the action-packed rush hour. Saturday nights were my favorite times to ride the trains, though, mainly because they were full of young people going out to have fun, often in a celebratory mood and dressed for the occasion. My favorite train line back in the early 1980s was the J Train out of Jamaica Queens. It traveled outside (instead of below ground in the subway) through Queens, Brooklyn, and over the Williamsburg Bridge, and the natural light allowed me to get great images without having to use a flash.

ND : 2022 has been especially busy for you so far, with many shows running plus more exhibitions and projects in the pipeline. What are you looking forward to the most?
Jamel Shabazz : Yes, the start of 2022 has been one of the busiest times thus far, with three major back-to-back solo exhibitions in three major cities. Right now, I am really excited about my solo exhibition at the Bronx Museum of the Arts, titled Eyes on the Street, curated by Antonio Sergio Bessa and opening on April 6. This exhibit will focus entirely on my New York street photographs, from 1980 to 2020, and many of the photographs in this show have never been seen before. I am also looking forward to the re-release of my book A Time Before Crack, published by Powerhouse Books. This revised edition includes texts from a number of writers who shed light on the impact that the crack epidemic had and even some personal accounts. It will also include a large number of never-before-published photographs and is due out in the coming months.

ND : What’s your advice for the next generation of street photographers?
Jamel Shabazz : The best advice I can share is: Carry your camera everywhere you go, have it out and set to capture any moment, at any given time. It is also good to have particular themes in mind as it helps the creative process.