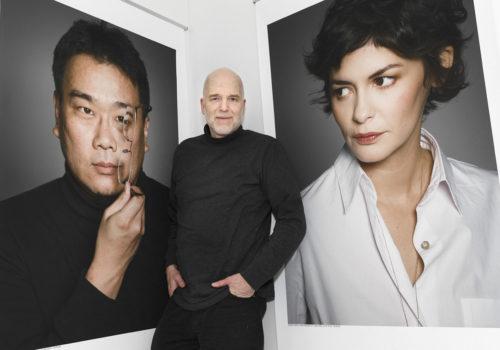 I met Gerhard Kassner several years ago through Matthias Harder and Vera Mercer. With his gentle demeanor and soft voice and ultra-glamorous images of the Who’s Who of Hollywood and beyond, he is one of the best portraitists I have ever worked with. Quick, gentle, but precise, he took more than 2,000 photographs during the Berlinale years 2003 to 2019. With his recent show HOLLYWOOD Stars at the Berlinale in the project space of the Helmut Newton Foundation, it was time to review the story behind the pictures and discuss what’s new.

Nadine Dinter: Your latest exhibition, staged in the project space of the Helmut Newton Foundation, is called Hollywood Stars at the Berlinale. What’s in store for the visitors?

Gerhard Kassner: My exhibition in the project room is rather broad and ties in with the 12 historical and contemporary positions shown in the exhibition on the upper level of the Helmut Newton Foundation, which features photographs created on location in Hollywood. Of the 2,051 portraits I took over 17 years at the Berlinale, I chose a small number of select images, mainly of Hollywood stars. But there are a few European stars there, too, with whom I have a personal connection. The main wall has seven large-format images, of the same size as those that hung at the Berlinale Palast over the years. Additionally, there are 21 series comprising 67 portraits arranged in a loose hanging on adjoining walls. Those portraits are shown in the same order as they were presented at the Berlinale Palast for signature and include some of my favorite compositions. In this part of the exhibition, the sequence as a whole takes precedence over the individual portraits.

Furthermore, I am showing two series demonstrating the portraiture process, with Robin Williams and Nicole Kidman. With digital photography, which I started using in 2003, you can set the shooting time to the second. This feature was particularly interesting with Nicole Kidman because I had exactly one minute to shoot. That was pretty exciting for me in the first year. I will tell you more about this specific encounter later.

Tell us a bit more about how it all started. When did you shoot your first star portrait for Berlinale, and do you remember who it was?

GK: When Dieter Kosslick took over as director of the Berlinale, the practice of taking 50x60cm Polaroids was retired, and I was invited with two other photographers (one female) to propose a concept for a follow-up portrait session that offered a signing opportunity at the Palast.

The large-format prints of Otto Sander and Renate Krössner that I submitted with my concept are likely what won over Kosslick, and he remained loyal to me over the many years until his departure in 2019.

We always did the portraits of the international jury on the day before the Berlinale opening so that the prints could hang on the wall for opening day. The first portrait I took was of Atom Egoyan, a Canadian-Armenian director, on February 5, 2003, at 17:29:29.

What was your procedure for shooting the portraits? Was the photoshoot part of the official press conferences?

GK: A studio was sectioned off for me in the VIP part of the press conference area. That’s where I shot the photographs, made the selection, and optimized them on the computer, and the large-format printer was also right there. In the VIP area, after being greeted by festival director Dieter Kosslick, the stars came to me alone in the studio, and then the whole cast went off to the photocall for the presentation. That was often packed tight with press photographers, who took the familiar photos in front of the blue background with the bears.

What camera and other equipment did you use? If I remember correctly, you had to switch equipment after a short period of time.

GK: Over the entire time at the Berlinale, Canon provided me with the latest digital cameras. I started out with the Canon 1Ds with 11 million pixels, and in my last year in 2019, I shot with the Canon 5DsR with 50 million pixels. In February 2003, I received the camera even before it was available for purchase. Initially, I had to use different lenses and changing them was a bit of a bother. Later, I had two cameras at my disposition, and it was much easier to change the focal length in the camera.

Do you remember your fastest and your longest sessions? Can you tell us a memorable anecdote from your time with the Berlinale?

GK: As I recall, the session with Ethan Coen & Joel Coen in 2011, who were there for True Grit, went by especially fast. The brothers took their place in front of the background, and their stance was perfect. The first shot would have sufficed, but I took a few shots just to be safe. After I thanked them, they said: Oh, that was fast.

The session with Nicole Kidman was truly memorable. Her manager was in the studio with us, and right as we started taking pictures, the manager said: That’s it. Only 1 minute and 14 seconds had passed. Considering the lens change, the shoot itself lasted precisely 1 minute. I was highly irritated by the voice intruding from the side to shut down our shoot, and it completely threw me off. Out of sheer nervousness, I couldn’t respond to Nicole Kidman’s wonderfully assuring words, “Are you sure you’ve got it? We could do some more if you’d like.” Fortunately, an iconic portrait had emerged in that short time. The Hours was the film that won Nicole Kidman her Oscar. Had that shot gone wrong, I might not have gotten the contract the following year.

In your show, we see portraits of Jack Nicholson, Nicole Kidman, and George Clooney, alongside newcomers like Timothée Chalamet, who have since become stars themselves. Did you approach your subjects in any particular way?

GK: In those short portrait sessions, we entered into the photographic dialogue with a clear common goal: to create an exciting image from the here and now that would hang on the wall for signature a few hours later before the film premiere. With professional actors, you can reach your goal quickly.

Do you have a favorite among the 2,051 Berlinale portraits you produced?

GK: 2,051 portraits is a lot. I don’t just have one but several favorite portraits. Some of them have accompanied me for years in my studio, and you can see many of them in the exhibition.

Were there any stars you expected to be completely different from how they actually were, standing before your camera?

GK: Having a spontaneous and unbiased encounter was important to me, and in the first few years, I often had no idea who would come into the Berlinale studio next. I also deliberately did not look for any previous portraits of the stars online. Later on, I started doing a bit of research on them ahead of time and had my assistant provide me with background information. Especially if you know someone from a film, it’s a good starting point for a conversation during the shoot.

The portraits have an enchanting, aura-like atmosphere. How did you set the light? How do you decide on the framing, whether it should be a close-up, a three-quarter shot, etc.?

GK: I can remember the night before my first day on the job in 2003. As I was digging through my equipment, I came across a portrait reflector I had used a lot in the 1980s. It produces a very clear light focused through a grid. I realized it was perfect for the small Berlinale Studio, and I had a clear idea about how to shoot. Another big help was my large studio tripod, which I always had with me. It helped a lot to use mainly a telephoto lens and to be very close to the subject without getting tense. To ensure I had enough interesting shots of the stars, I usually photographed both three-quarter and close-up shots. Then I could decide in the final selection how to crop it.

What’s your advice for photographers who have to work under pressure?

GK: You can defuse some of the pressure by being mentally and technically prepared, and don’t experiment too much during the shoot. It always helped me to work in slippers – it just felt better with relaxed feet.

„HOLLYWOOD Stars at the Berlinale“
On view through 14 August 2022
at the project room of the Helmut Newton Foundation
Jebensstraße 2, 10623 Berlin