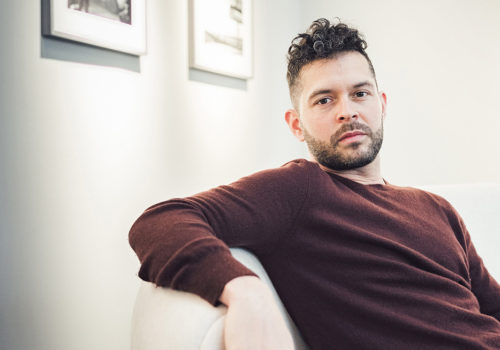 Bene Taschen is one of the “makers & shakers” in the international photography scene. Already at a very young age, the Cologne-born cosmopolitan decided to pursue a career in the arts. This month, his renowned Galerie Bene Taschen (formerly Hardhitta Gallery) is celebrating its 10th anniversary. To mark the occasion, Taschen will not only pop the Champagne corks, but also launch his second gallery space in Cologne, at Lindenstrasse 19 (formerly Jablonka Galerie).
Having worked with Bene for the past 7 years, I felt it was high time to tell the story of his gallery and share some more insights – so we sat together and discussed: what’s new!

Nadine Dinter: In 2011 you founded your own gallery, and are celebrating its 10th anniversary this fall. Did you always want to become a gallerist?

Bene Taschen: Actually, it happened by coincidence. Originally, I wanted to open up a diner, but ended up running a gallery.

At first, you called your space Hardhitta Gallery. Tell us a little bit more about the story behind that name.

BT: When I started it as a pop up-gallery ten years ago. I didn’t even think about running it for so long, I just did it. Otherwise, I probably would have thought of a different name. The name “Hardhitta” doesn’t have any special meaning. But it served as the gallery’s name for quite some years.

Who was the first artist you took on board, and how did you go about adding new artists to your gallery roster?

BT: It all happened organically. First, I had one artist in the gallery: Gregory Bojorquez. After the third pop-up show with him, I started getting a little nervous. I thought: You can’t have a gallery with just one artist. And then I meet someone who had stopped by one of the shows with Gregory. He had a very special aura, and we ended up having a conversation that lasted 1.5 hours. He became the second artist in the program: Joseph Rodriguez.

After running a gallery with a flexible location, moving around a few times in Cologne, your space is now located on Moltkestrasse. What made you decide on this as a long-term address?

BT: The gallery at Moltkestrasse is located in the Belgian Quarter (Belgisches Viertel) in Cologne. It’s pretty much the heart of the city. This area has a lot of restaurants, boutiques, and galleries; you could say it’s an artsy neighborhood. I am very happy to be there.

Your gallery program is focused on street photography and portraiture; is this by chance, or do you have certain criteria for selecting new artists?

BT: I would say that the gallery has a strong focus on documentary photography. But we also show painters, like Charlotte Trossbach, and we have done shows with David LaChapelle, and soon with Julius Shulman. I don’t choose an artist according to a list of criteria. The only thing that’s important is whether she or he is an extraordinary artist or photographer in my eyes.

You are part of the Taschen family. Did your upbringing influence you in terms of your affinity for art?

BT: Yes, definitely: I was exposed to a lot of relevant and good art early on.

BT: I would describe myself as an independent gallerist who loves his job, working with artists from and collectors from all over the world. There is often a lot of travel involved, also with the art fairs.

This month (September) you will be opening a second gallery space in Cologne, on Lindenstrasse. Located in the courtyard, it once housed Jablonka Galerie. How did this come about?

BT: I’ve known the space on Lindenstrasse for quite some years, and would regularly see Rafael Jablonka’s shows there. It’s one of the most beautiful gallery spaces I’ve ever visited. So, I am thrilled that it’s now our second gallery space and just a 10-minute walk from our Moltkestrasse location.

What’s planned for the upcoming months? Will you be exhibiting at Paris Photo this year?

BT: First, we are looking forward to opening the new space with a group show of all the artists, represented by the gallery. Then we will be featuring Hardened by Jeff Mermelstein – it’s going to be brilliant. And we have some great shows lined up after that. And yes, we are also going to do Paris Photo as well as Art Cologne.

What’s your advice for aspiring young gallerists who want to make it in the art world?

BT: You have to believe in the artists you work with. It’s a long-term commitment and a full-time job. You’ve got to love it! J

Opening of the new Gallery Space and the group show:

Opening of “Hardened” by Jeff Mermelstein