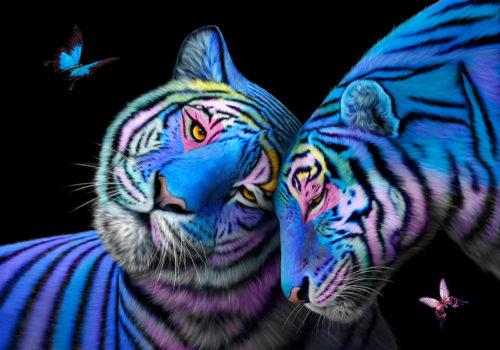 Wanrooij Gallery in Amsterdam presents a solo exhibition of the American-Korean visual artist Koh Sang Woo. The exhibition Wild in Blue shows a selection of colorful photographic paintings. The vivid portraits of wild animals, with human characteristics, display a prominent use of the color blue with a subtle pink hart.

Koh Sang Woo is internationally known for both his blue tone photography as the recent ‘Blue Endangered Animals’ series in his signature style. For the series of endangered animal species, including pandas, tigers, bears and elephants, he combines photography with digital painting. The artist is inspired by the work of Jackson Pollock, Willem de Kooning and Andy Warhol.

As in traditional art, the animals are portrayed frontally; to communicate with them and to grant authority. The confident expression powerfully reflects character, personality and emotions, just like people. The portraits are characterized by bilateral symmetry and a sense of static stability and unity. As an artistic message from Koh Sang Woo, wild animals are equal to humans and deserve respect; with the longing for a harmonious society where animals and humans coexist.

Koh Sang Woo (1978) lives and works in New York and Seoul. He graduated from the School of the Art Institute of Chicago (SAIC). He double majored in Photography and Performance Art. The artist exhibits worldwide. His autonomous work has been presented at leading art fairs such as The Armory Show in New York, Art Basel in Hong Kong, Art Miami, KunstRAI in Amsterdam and SCOPE Basel, and is included in the collections of the National Museum of Modern and Contemporary Art and the Savina Museum in Korea. In 2021, the extensive and iconic oeuvre was captured in the monograph ‘Koh Sang Woo 20 Years’.

Wanrooij Gallery will also present a selection of paintings by two new Indonesian artists, Elang Sutajaya and Valdo Manullang, at the same time as the Koh Sang Woo exhibition; as part of the gallery’s Unexpected program.