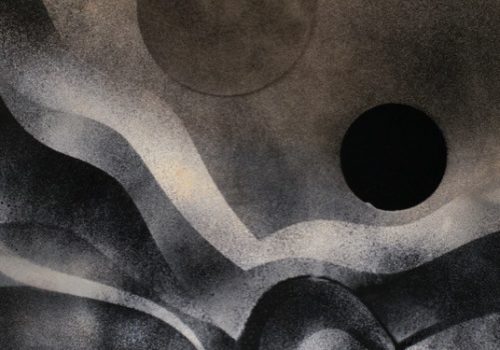 Chemistry and Light brings together the work of Chuck Kelton and Joseph Minek — two artists who practice versions of camera-free photography. They each elect instead to work directly with the raw materials of darkroom practice — paper, chemicals, lightbulbs — generating unique monoprints. Their energetic works carry resonance with abstract painting and natural phenomena.

Taken together, each to the other, Kelton and Minek represent in their common philosophies and divergent differences some contours for a genre. In one sense traditionalists — aka being actual darkroom photographers — nevertheless they eschew the fundamental conventions of both camera and film in pursuit of a deconstruction of the medium that is both more pure and more complex. There is a rich legacy in the historical avant-garde, of artists with a soul of scientific inquiry who take this kind of almost anatomical approach to centering the building blocks of their practice. But as each Kelton and Minek take it up, this center vectors off according to the aesthetics and axioms of each one’s vision.

A photogram is made by exposing photosensitive paper to light; chemograms are made by exposing it to chemicals like developer and fixer. Chuck Kelton makes both chemograms and photograms, and frequently combines the techniques in single images. His velvety, stormy compositions of inky black and mottled bronze, burnt amber flares and soft, swirling shapes conjured in liquid air have a way of resembling landscapes. By folding the paper, Kelton creates a “seam” that operates as a horizon line, enhancing this effect. Meanwhile the organic and self-determined elements of the picture evoke phenomena like cloudfronts, fires, undulating waves and ridge lines — and in the most recent work, a more primordial planetary narrative.

Kelton’s embrace of hand-embellished applications of gold and iron along with the oxidized silver and chemical array necessitates a process that can take months to enact, counteracting the idea of the instantly appearing photographic image and instead operating on earth time. With richly detailed textures and the appearance of linear shapes and the clean spheres of heavenly bodies, these works have the luminosity of photography with the physical and optical complexity of geological impasto. His process additive, and in his pieces he manages to not so much depict as to embody and enact the forces of landscape.

Kelton’s work has been featured in numerous exhibitions and publications and is in the collections of The Getty Museum, The Los Angeles, The Museum of Fine Arts Boston; the Bibliothéque Nationale de France; The Norton Museum of Art, West Palm Beach, International Center of Photography, New York; and New York Public Library among others. Kelton lives and works in Jersey City, NJ.

Joseph Minek also works in a “well lit darkroom” but his interests are less in the forces of nature and more in the inherent, literal physical properties of photographic mediums. Exposing high-gloss photoreactive paper intended for use with color film to intuitive and complex cocktails of photo lab chemicals and bright light, Minek teases out a form of abstraction that is chromatically exuberant and infinitely variable. Within a prismatic array of chartreuse, fuschia, emerald, indigo, robin’s egg, mustard seed, mauve, lavender, blood orange, the overlapping pools and fractal linearities of the chemicals in the tray leave their traces not only in the explosive palette but in the intricate patterns, translucent layers, and oil-slick parabolas which the liquid traces and eventually settles on.

Minek’s work has been exhibited consistently since 2010 and his work is in public collections such as The Cleveland Museum of Art, The Rubell Family Collection, Miami and Bidwell Projects, Cleveland among others. The artist lives and works in Cleveland, OH.