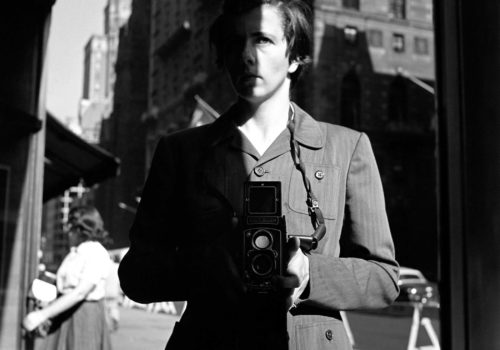 A few months ago very few people, if any, had heard of Vivian Maier. Today, her lifetime body of work of over 100,000 negatives and more than 3,000 prints finally see the light amazes photography experts and enthusiasts aound the globe. “Finding Vivian Maier: Chicago Street Photographer” recently opened at the Chicago Cultural Center.

In 2007, John Maloof bought a box of negatives at an estate sale. The find was supposed to be of some help on a book he was co-authoring on Chicago’s history. The images were useless to the book, but when going again through the negatives that he was thinking of unloading on ebay, the 29 year old realized the treasure he stumbled upon.
More research, led to more photographs and in 2009 he fell on a recent obituary of Miss Maier where there was no mention of her photography.
With his friend Anthony Rydzon he devoted his time and energy to track down the life of the elusive photographer and her work with a mission in mind, as he states “There was so much more to this work than I thought, and I realized that I was sitting on something more important than I ever imagined. Now our goal is to get her name out there. To get Vivian Maier into the history books.”

Born in 1926 in New York to Austrian and French immigrants parent, Vivian Maier spent most of her childhood in France to end up in Chicago in 1956 where she worked as a nanny to wealthy North Shore families.
On her days off, she took photographs, a lot of them. Through decades, the private and reclusive Maier walked the streets of Chicago with her Rolleiflex, photographing people, documenting street life, exploring abstraction, sometimes taping her conversations with her subjects.
Only, she didn’t show them to anybody. With little doubt, without Maloof we would would have never heard of Vivian Maier.

In an interview with the Guardian, Lanny Silverman, the exhibition’s curator says “the best of her work ranks up there with anybody. She covers humanist portraiture and street life, she covers children, she covers abstraction and she does them all with a style that I think digests the history of photography… There’s work that reminds me of Diane Arbus, for example, but they were done before Diane Arbus. A lot of what she was doing was ahead of its time.”
Gilles Decamps