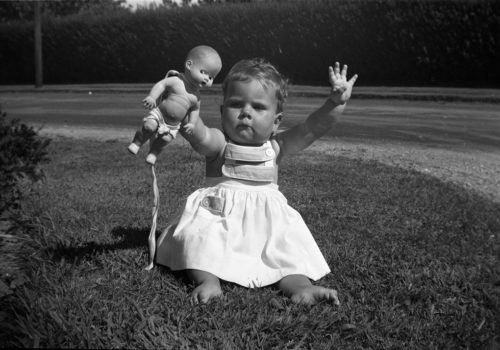 Vivian Maier grew up in the French alps during the 1920s before moving to the USA where she captured the 50s and 60s of post-war Chicago with perplexing clarity through her photographs; pictures that predominantly feature the people on the street, ordinary people going about their daily lives. She never shared these photographs, altogether more than 100,000, with anyone, and it was only the recent discovery of her material that exposed her to the world as one of the biggest talents of photographic art in the 20th century.

While Maier was wandering through the streets of Chicago with her Rolleiflex, Lu Yuanmin was growing up in another world, in the Chinese metropolis Shanghai. His formative years were deeply affected and distorted by the chaos of the Cultural Revolution and its aftermath. But this did not stop him from starting to capture, with the same passion as Maier did in Chicago, everyday life in Shanghai with his camera. If anything the experience of these years of turmoil fostered a deep passion for humanity in him.

And even though the 50s and 60s of Chicago and the 1990s of Shanghai at first glance appear to be times and places that cannot be easily compared, their pairing in this exhibition is not at all accidental or random. It serves instead to highlight both their similarities and differences. During these times, a sense of new beginnings and possibilities could be felt in both cities, and this atmosphere of change was driven by the human subjects captured in the photographs of both Maier and Lu. However, the circumstances under which these paradigm shifts were made possible couldn’t have been more different from each other.

In post-war America individuality and personal freedom reigned absolute and became something resembling a state ideology, the pure expression of the American way of life where everyone could “make it”. And while this enabled the beginnings of a boom economy that would turn the USA into the superpower we know today, it also exposed the individual to the unrelenting forces of capitalism and left everyone fighting for themselves, pitilessly sorting people into winners and losers.

China in the 1990s however was marked by a different, more careful and strictly controlled shift. While there suddenly was room for individual initiative, the overall development and the direction thereof was and still is tightly guarded and guided by China’s Communist Party. Economic individuality is allowed and encouraged, social and political individuality is not.

And so taking a closer look at the photographs of Vivian Maier and Lu Yuanmin can be unsettling as they are saturated with raw emotions. They are close-up, they are in the moment, good and bad. But they are also reassuring in the humanity they share. Styles, cultural codes, and politics, they all may differ greatly in these two unlike cities, but the common expressions in the faces and gestures of their inhabitants are comforting. That what unites us is (still) more powerful than that what might divide us.