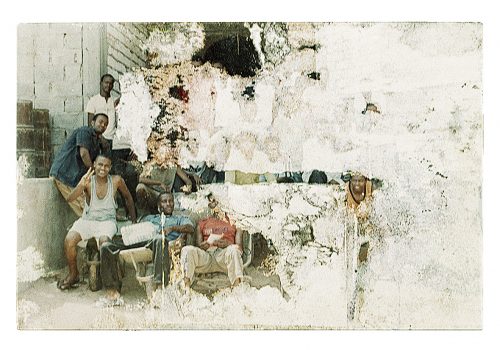 ¡Viva Villa! is the first Festival of Artist Residences, emanating from the 3 main French cultural institutions housing artists abroad (Villa Kujoyama in Kyoto, Villa Medici in Rome and Casa de Velázquez in Madrid). Under the curatorship of Cécile Debray, this multidisciplinary festival – which takes place for the 5th time and returns for the 2nd consecutive year to the Lambert Collection in Avignon – has as a theme: Les vies minuscules. It will last until January 10! – Jean-Jacques Naudet

Samuel Gratacap won a grant from the CNAP in 2012 (aid fund for contemporary documentary photography) then the Le BAL-ADAGP prize for young creation in 2013. His first monographic exhibition La Chance was presented at the CRAC Languedoc- Roussillon de Sète in 2014. His work carried out over two years in Tunisia in the Choucha refugee camp (2012-2014) was the subject of a solo exhibition at BAL (Paris) in 2015 and a publication by Éditions Watermarks. That same year, he received a special mention from the jury at the Plat (t) form meetings at the Fotomuseum in Winterthur as well as a work grants from the FNAGP (National Foundation for Graphic and Plastic Arts) and  agnès b. for the project Les Naufragé (e) s (Libya), exhibited at the Institut du Monde Arabe as part of the Biennial of Photographers of the Contemporary Arab World. In 2017, he won the Arendt Prize for the European Month of Photography following his solo exhibition at MUDAM. That same year, he exhibited Fifty Fifty (catalog published by Gwin Zegal) as part of the official Rencontres d´Arles, an exhibition on Libya torn between war and the plight of migrants. From 2017, he gradually returned to Italy and France, focusing on the living conditions of immigrant workers from southern Italy and solidarity actions on both sides of the border in the Alps region. . In 2018, he received support from the Institut français (Résidence Sur Mesure) and the Center National des Arts Plastiques as part of the FLUX photographic commission. He is a resident at the Académie de France in Rome – Villa Médicis in 2019/2020.

“This experience of staying at the Villa was very positive. If I was not able – during the confinement period – to work on the shooting of the film’s scenes, I nevertheless chose to offer a reading of the film through the images (photos and videos) that inspired it and that I have performed over the past ten years.

Thus, for the exhibition of residents of the Villa Medici entitled ‘Dans le tourbillon du Tout-Monde’ (as well as for its catalog), I chose to replay the film’s script in 14 sequences. “

Working in photography, video and text at the same time, Samuel Gratacap offers a body of documentary notes and archives for the scenario of a film. This is the story of Amadou, a young man on the move, and his meeting with three other young people. Nothing is there to designate a precise geography, except that linked to the landscape and the language. They have different cultures, different visions.

Amadou first tried unsuccessfully to cross the Mediterranean: he experienced a first shipwreck before he got there. The young Italians in the film are bored, go around in circles, they lack benchmarks and break with their societal model. They do not find their place and decide to make one.

This story is based on real events and the timeline of the scenes may change. The meeting between young people is central. Scene 10 (or part of it) could be placed at the start of the movie. In this scene, Amadou, finally arrived in Italy after a long journey – and after working in the fields and experiencing fire in his camp – meets the other three protagonists. They are in a busy public square, it’s the end of the day. They sympathize and join a party to dance the night away.

They end the evening on a beach before dawn. The meeting took place. The film will follow them, then Amadou will be alone to continue his journey, to France, beyond the Alps.

“This is my first film, a magnificent and dense experience. A real encounter with the actors including the main actor of the film, Amadou Juldeh Bah and the young woman who accompanies him, Elena Ordonez Valverde (to be found on the photos of scene 13). “

Samuel Gratacap is participating in the FLUX exhibition, a photographic commission from the CNAP as part of the Photaumnales to be held at Diaphane (Hauts de France photographic center) in Beauvais from September 19 to January 3. https://www.photaumnales.fr