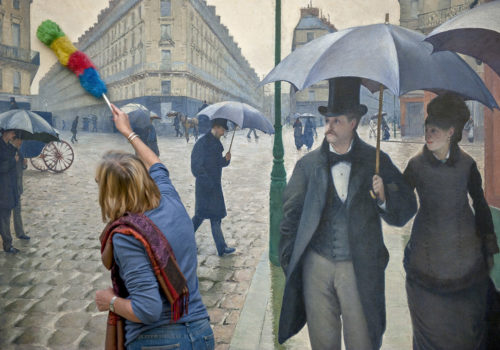 The artistic production that was for millennia at the service of religions and cults has now itself become an object of worship; it has its temples, museums, and its faithful, us, the public who each year seem more enthusiastic to extract ourselves from the contingencies of daily life to celebrate it during major exhibitions.
This series deals with work in museums, during the preparation of these high masses. Nicolas Krief began this work in 2010. The 30 photos presented here were taken at the Grand Palais, the Musée d’Orsay, and the Palazzo Ducale in Venice.
When he began this work, one of his first impressions was the liturgical dimension of the scenes he witnessed: precious and admirable objects, handled according to strict rules and procedures, practiced by specialists. The question of his relationship to the museum object quickly appeared central to him, and his gaze sharpened.
He clearly saw a phenomenon of transubstantiation taking place: the museum enthroned the exhibited object, as a cult object, as a work of art or pop art.
These moments of hanging seemed to him to be exceptional moments in the relationship we have with the museum object, the art object, with art.
Moments when the different proximities to the sacred are expressed, and the different relationships to the work of art.
His images are snapshots. No posing or staging, no extra lighting.

Nicolas Krief is based in Paris, works regularly for the daily press and magazines: Le Monde, Paris Match, Le Figaro Magazine, Ideat, The Good Life, Télérama…and also for museum institutions. At 20, he read Mythologies by Roland Barthes, which had a great influence on him. He discovered another intelligence of the signs of our time, of the strength of language in the face of formulas or evidence. The photography to which he tries to belong only makes sense if it allows and contributes to a better understanding of reality.
Nicolas Krief likes to give a literary and epic dimension to ordinary situations. His personal work takes him behind the scenes of museums and major exhibitions, where he explores our relationship to art and the work of art, in his series Accrochages. For several years he worked on culture and rural life in France. His series “Jours de fête” reportages on moments of sharing and sociability in Sarthe.
His work is distributed by Divergence Images.
www.n2-photo.com/wordpress/