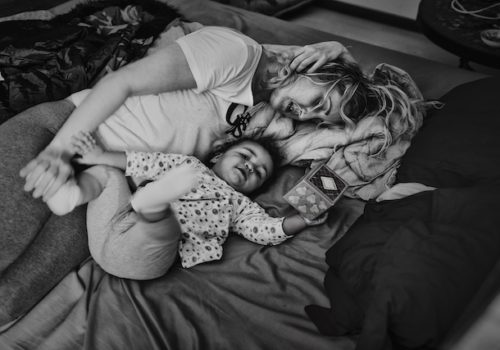 For her photo essay, Axelle de Russé focused on the issue of reintegration. She gave us her point of view on the situation in France: Reintegration is not taken into account at all in France. Even politically. This year, the Economic, Social and Environmental Council (CESE) published a report on the 2020 budgets devoted to prison: there are 694 million euros allocated for penitentiary furniture against 89 million for reintegration. The report shows, however, that it would cost less to ensure that the reintegration route is thought through upon entering prison. Today, reintegration is limited to three three-day leaves for smaller sentences and five days for longer ones to “renew family ties” or “look for work”.

“It has never happened to me, as a photographer, to achieve such intimacy …” Axelle de Russé

In 2017, photojournalist Axelle de Russé got involved with female prisoners in Joux-la-Ville (Yonne) prison. After their release, she followed four of them on the difficult road to reintegration. A project, still in progress, exhibited at the Visa pour Image festival in Perpignan.

What brought you to this prison in Joux-la-Ville, when did this reportage begin?

The prison world has obsessed me for a long time. I did a few projects on freedom deprivation in women’s prisons in Venezuela and Peru, and a few reportages in France, but in very strict settings, where people could not be recognised.

One day by chance, a very good friend of mine wrote a script for a movie, which takes place in a prison in which the inmates are the actors . She put me on the camera crew to take some backstage photos. I jumped at the chance.

During the two weeks spent in the prison, we talked a lot with the group of eleven girls who played in the film. They really touched me with their fragility, their sensitivity and their despair. They were all at the end of their sentence, with a desire for freedom, but also the fear of leaving. When you haven’t seen your family for a long time, when your children have been placed and you were already disassociated before you entered prison, the thought of getting out is like a huge wall. I offered to keep in touch and meet outside. One of them called me the day before she was released to ask me to come to see her the next day. It started there.

How did you manage to achieve this level of intimacy with them?

We met in a setting that gave them confidence. The prison causes them to lose their self-esteem completely, and the film came about as something positive. I think if I had contacted an association saying “I would like to follow women after they get out of prison”, it wouldn’t have happened the same way at all. We had some intense, almost friendly moments in this prison. On leaving, the relationship was already established. Otherwise it wouldn’t have worked.

Once outside, how did you position yourself in relation to them, to show their reality without falling into miserability?

We saw each other once a month for two years. I used to go to Verdun and Troyes to see Magalie and Adeline. I saw Rahmouna again later when she contacted me. Each time I visited, I would stay a day or two. Not too long to take up too much space, but long enough to learn about their daily life. In the end, I took very few photos. When we usually go on a reportage, we already have photo sequences in mind, everything is very organized. There, I found myself living with them. I slept at their place, we spent two days together like friends. We got up, we showered, we went shopping. I was not in a logic of productivity. For me, it was something very unexpected. I was taking pictures like when you’re with your family, and having a good time that you want to keep a record of.

Do you still see each other today?

Yes ! Right now I’m sending photos to Adeline all day. Denis Brogniart visited the expo this morning, I sent him a picture of him, in front of her portrait. She’s going to be disappointed that she missed him. She is coming to Perpignan in two weeks, with Magalie and Rahmouna, we wll show the exhibition to school children.

Do you think this project and its spinoffs can help them regain self-confidence?

I would like it. But it depends a lot on the course they follow. For example, Adeline is in a real process of reintegration: she has a home, a companion who works, a stable situation for a year. We call each other very often, we see each other a lot. I think it makes her feel good. It’s harder for Magalie and Rahmouna. I’m not sure this project really helps Rahmouna regain her self-confidence. She doesn’t like to be photographed. But they want to teach so it does not happen to others and want this project to be used for something, perhaps for prevention.

Did you somehow maintain a bond during the lockdown?

We called each other. Not a lot, but we called each other. Obviously, they were all confined and when I asked them how it was going, they replied: “Very well! We spent four years, ten years locked up, we were in 3m² cells. There, we have larger spaces, we can still go out. For us, this confinement is happiness! ”

Is this a project you want to continue?

I continue, yes. A fifth woman was released from prison on March 10, six days before confinement. I’ll meet her next week, we haven’t been able to see each other before.

It’s never happened to me, as a photographer, to achieve such intimacy… I don’t know how to explain it at all. I want to see what they will become, to grow with them, to see them evolve, to see Adeline’s little one grow. They are part of my life. I have been thinking about them and what we are going to do every day for about three years.

When I was told that I was selected for the show, I thought to myself, “But I’m not done! And I don’t know when I’m going to finish. I absolutely want the expo to run to really raise awareness. I’m even thinking of writing a book.

Why did you choose black and white?

Initially, the photos were in color and it didn’t work at all. I met a photo editor from Figaro Magazine, Cyril Drouhet, and he said: “Why don’t you try in black and white? A great first for me to work in dichotomy. Oddly, with black and white there are photos where you don’t know if the girls are inside or outside. Even when they get out of prison, they stay at home a lot, so I found that not knowing if they were inside or outside brought more to the subject. One might ask, “Yes, they were released, but are they really free after all? ”