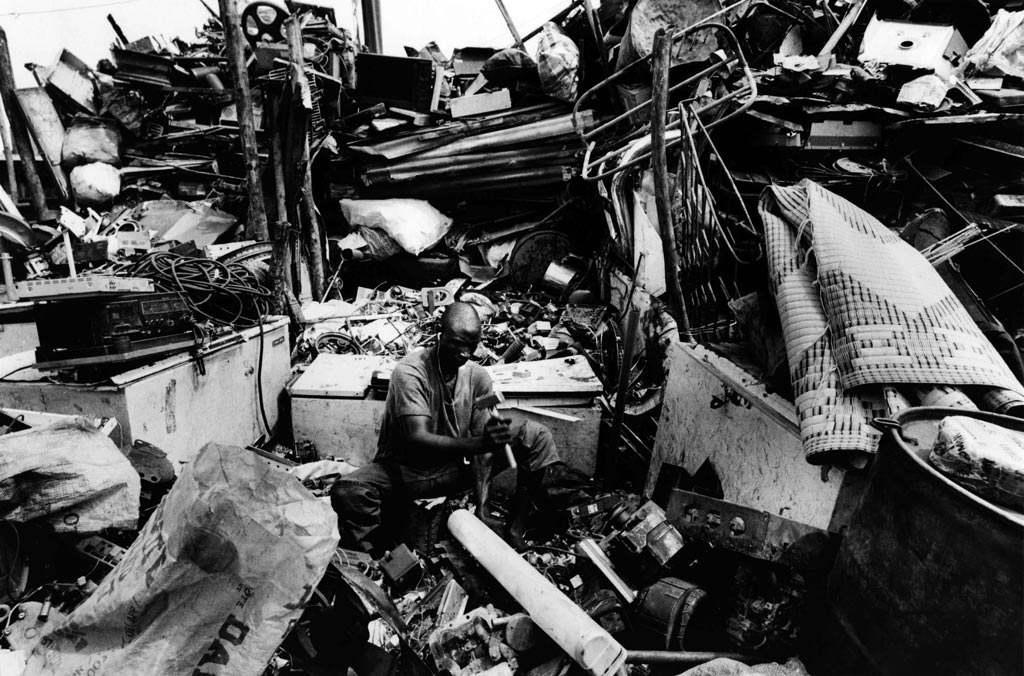 Standing at the Graveyards of E-waste
Stanley Greene / NOOR

Our computers and smartphones have a short life, but what happens to them once they are discarded? Recycling these devices has become a real industry; with copper and gold people can make a living by dismantling them and selling every part and particle of value. In Nigeria, India, Pakistan and China, Stanley Greene has recorded the appalling conditions of the recyclers. Your telephone will never look the same to you after you have seen this reportage.

With support from Géo France and a Getty Images Grant for Editorial Photography.

Born in New York in 1949, Stanley Greene was as a teenager a member of the Black Panthers and anti-Vietnam War activist. After being a painter for many years and following an education in arts, he turned to photography in 1970. Five years later, he co-founded Camera Work Gallery, an exhibition space for avant-garde photography, with five other photographers in San Francisco. An encounter with W. Eugene Smith turned his energies to photojournalism. Stanley began photographing for magazines, and worked as temporary staff photographer for the New York Newsday.

He soon found himself photographing the myriad aspects of the decline of communism and the break-up of the Soviet Union. While working for the Paris-based photo agency Agence Vu in October 1993, he was trapped and almost killed in the White House in Moscow during a coup attempt against President Boris Yeltsin. He was the only western journalist inside to covered it. Two of his pictures won the World Press Photo Awards.

He went to Southern Sudan to photograph the war and famine there for Globe Hebdo (France). He traveled to Bhopal, India, for Globe Hebdo again, to report on the aftermath of the Union Carbide gas poisoning. Greene was invited by the group Médecins sans Frontières (Doctors Without Borders) in the summer of 1994 to document their emergency relief operation from the cholera epidemic in Rwanda and Zaire.
He has covered the war-torn countries Nagorno-Karabakh, Iraq, Sudan , Darfur , Afghanistan Kashmir, and Lebanon.

Stanley Greene was a member of Agence VU in Paris from 1991 to 2007. Beginning in 1993, Greene was based in Moscow working for the French daily Liberation, the weekly, Paris Match, Time, The New York Times Magazine, Newsweek, Le Nouvel Observateur as well as other international news magazines.

From 1994 to 2001, Greene photographed extensively the conflict in Chechnya, between rebels and the Russian armed forces. A body of his work from this time was published in a book by Actes Sud in 1995 : Dans Les Montagnes Où Vivent Les Aigles. His work also appeared in Anna Politkovskaya’s 2001 book, A Dirty War: A Russian Reporter In Chechnya. He also made a great impression with the photo book “Open Wound: Chechnya 1994-2003”, published by Trolley in 2003.These photos have drawn attention to the “suffering that has marked the latest surge in Chechnya’s centuries-long struggle for independence from Russia”.

Stanley was awarded a Katrina Media Fellowship from the Open Society Institute in 2006.

In 2010, to mark the fifth commemoration of Hurricane Katrina, he set up with Kadir van Lohuizen “Those who fell through the cracks”, a collaborative project that documents Hurricane Katrina’s effects on Gulf coast residents who are still struggling to reestablish their lives after the storm. This truck-exhibition took them from Houston to New Orleans.

Stanley Greene co-founded in 2007, Noor agency, launched in Perpignan, Visa pour l’image Festival, that represent twelve photo-journalists. In 2008, he traveled to Afghanistan and shot a story about “the crisis of drug abuse and infectious disease” : “Road to ruin”. His book “Black passport” was published in 2010 and published by Schilt Publishing, Amsterdam. He has won five World Press Photo awards for his work around the world and won the W. Eugene Smith Award and the Alicia Patterson in 2004. His work has been published in Libération, New York Times Magazine, Newsweek, Rolling Stone, Paris-Match, Time, Stern and Fortune, among others… Recently Stanley Greene won the Pipak 2011 (International Price Albert Kahn Planet). He also had an exhibition : “Entre chien et loup”, in Paris at La petite poule noire gallery in november 2011. In june 2012, he was the guest of honour of Tbilisi photo festival, in Georgia and invited at the Look3 festival of the photograph in Charlottesville, Virginia (USA) in june 2012.
He started to document the e-waste project in january 2012, traveling to Nigeria, India, China and then Pakistan. With the support of Geo Magazine France and Getty Images Grants for Editorial Photography.
This work has been chosen for Visa pour l’image 2012, the international photojournalism festival and will be published in october 2012 in Geo France Magazine. The project is being shot in black and white films, and Leica range finder camera the film is processed by Dupon and printed by Nathalie Lopparelli of Fenetre sur cour.

Stanley Greene is based in New York and Paris.