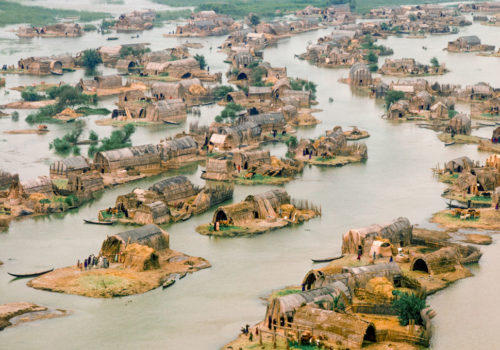 Nik Wheeler’s portrayal of life among the marshmen of southern Iraq is the only in-depth photo-reportage in the marshes ever authorized by Saddam Hussein’s regime. The photos, originally shot as a National Geographic assignment in the late 1970s, show the “Cradle of Civilization” where Marsh Arabs paddled canoes around villages of elaborate reed houses set in a vast plain of water and reeds at the mouth of the Tigris and Euphrates Rivers. Years later, Saddam Hussein napalmed the villages and drained the marshes, destroying a unique way of life that had existed for five thousand years.

Nik Wheeler
Nik Wheeler began his professional photographic career as a combat photographer for United Press International in Vietnam, covering major battles such as the Tet Offensive and the Battle of Hue. After two and a half years based in Saigon he moved to Beirut to freelance throughout the Middle East, covering the Jordan Civil war for Time Magazine and the Yom Kippur War for Newsweek and shooting assignments for the London Sunday Observer and Telegraph Magazines and National Geographic. His first book “Return to the Marshes”, shot in the Marshes of Southern Iraq and published by Collins, was an expansion of a National Geographic assignment.

In the mid-seventies he relocated to Paris under contract with Sipa Press and traveled the world covering major international events including the Montreal Olympics, General Franco’s Funeral, the “Thrilla in Manila”, the Coronation of the King of Nepal and the Fall of Saigon. It was during this period that he took his famous picture of arch-terrorist Carlos the Jackal at Algiers airport – a photo that was acknowledged to be one of the most important Photos of the 20th Century.
Living in Los Angeles in the late seventies Nik worked on several more books including a second book on Iraq “Land of two Rivers”, followed by “Cloud Dwellers of Nepal” on the Bhotia people of the Himalayas on the Nepal/Tibet border and published by Time Life Books and books on China and the Chinese Junk.

Working through the Black Star agency in New York he traveled widely on assignment doing stories on the “Wild Horse Roundups” for GEO Magazine, “Polygamists” for the Sunday Times Magazine and “Berber Bride Fair” for National Geographic. Other client magazines included International Wildlife, Travel and Leisure, Travel-Holiday, Departures and leading European Magazines such as Terre Sauvage, Amica, Bunte and Stern.

In recent years, since moving to Santa Barbara, Nik has focused almost exclusively on travel and stock photography, marketing and distributing his work both independently and through Corbis and other overseas agents. As co-founder of the award-winning Insiders Guides (later the Travelers Companion ) series of illustrated travel guides he has amassed a a vast library of more than 500.000 images from more than 80 countries around the globe. His photos have graced more than 300 magazine and book covers and his work appears regularly in major travel publications.

In 1988 he was named US Travel Photographer of the Year and was runner-up for the same honor in 1992.

In the last few years Nik has participated in exhibitions at galleries in Washington DC, at the Museum of Art in Santa Barbara, at Harvard University and at the Fowler Museum at UCLA.