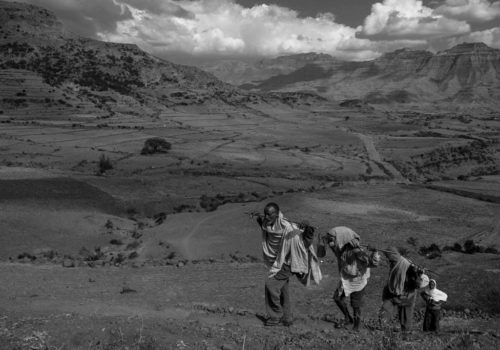 Journey to Jerusalem of Africa

Ethiopian faith radiates from two cities: Jerusalem and Lalibela, in Ethiopia’s highlands. ‘Jerusalem of Africa’ is one of the names given to Lalibela, also known as ‘Black Jerusalem’. It is famous for its 12th century monolithic churches carved out of the ‘living rock’, and is one of the world’s great wonders. These exceptional shrines are said to have been built during the 25-year reign of King Lalibela – with, as legend has it, more than a little help from the angels.

Lalibela became a holy city after the capture of Jerusalem by Muslims (1187AC); since pilgrimage to the Holy Land was no longer possible, King Lalibela declared the site as New Jerusalem. Ethiopian faithful make pilgrimage to Lalibela at least once in their lifetime.

Every year thousands of pilgrims make their way to the sacred city of Lalibela by bus, by foot or by air, to celebrate Christmas. Fascinated by their strong devotion, I travelled to Ethiopia three times to further focus my reportage. The pilgrimage, its faithful worshippers, the rituals and ceremonies, some of which are very ancient and preserved to this day, seem almost to illustrate the Old Testament. I was unable to avoid the feeling of going back in time – way back. In the days leading up to Christmas, Lalibela becomes the beating heart of Ethiopian Orthodox Christian faith.

Tens of thousands of worshippers flock through tunnels and passageways connecting the churches, rushing from one shrine to another in their quest to visit all eleven holy sites. On Christmas Eve, an open-air ceremony is held at the Bet Maryam church, dedicated to the Virgin Mary. The compound fills with the white-clad faithful, with those lucky enough to get in filling up the church’s courtyard as they stand shoulder to shoulder. Many more are left outside on the surrounding hills. It is a truly biblical scene.

Deacons in their white traditional Shamma tunics and white turbans bearing prayer sticks and sistrums (percussion instruments) sing and dance to the rhythmic sound of African drums, as the celebration continues through the night. The worshippers chant and sing, and hold candles while the high clergy lead the ceremony dressed in colourful satin and velvet robes, and carrying the traditional embroidered-fringe umbrellas. Early morning at first light, large processional golden crosses and icons are brought out to the sound of ululations from the devout crowds celebrating the birth of Jesus Christ. The pilgrims are at the end of a 43-day period of fasting during which they have abstained from eating animal products, including meat, eggs and dairy.

Gali Tibbon is an independent photographer based in Jerusalem, Israel. With more than a decade of experience in the Middle East, her work has taken her on assignments in Turkey, Cuba, Egypt, Jordan, Ethiopia, China, Spain, France, Poland and Ukraine.

Gali’s images are published regularly worldwide in the world’s most reputable newspapers and magazines such as Geo and French National Geographic. In recent years Gali has been exploring the theme of religion focusing on faith through pilgrimage and rituals, baptism in the Jordan River, Christianity in Jerusalem, the ancient Samaritans, Ethiopian Christianity and pilgrimages across Europe. Her work has been projected and exhibited in international photo festivals and galleries including the International Photojournalism Festival of Gijon; Le Rencontres d’Arles; Visa Pour L’image, Perpignan; the Galway Arts Festival; and War Photo Limited Museum, Dubrovnik, Israel Museum.

Gali has been the subject of two documentary films: “Mirrors of War” directed by Patrick Chauvel, widely screened in international film festivals, and “Beyond Assignment” produced by the Knight Center.