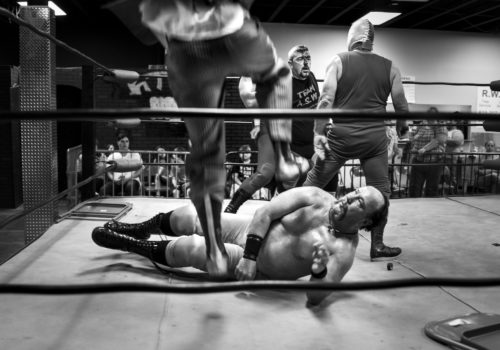 There are still a few small towns in America where – often on Friday nights – families can find an evening of excitement, participatory theatre, and dinner (if hotdogs and soda pop qualify), in the form of “indy” wrestling, the bottom rung of the professional wrestling ladder. Has-beens and wanna-bes who are either too old or too young, too fat or too skinny for the big leagues don home-made costumes and do battle in makeshift arenas, playing out what wrestling fan Roland Barthes called “a great spectacle of Suffering, Defeat, and Justice” that “presents man’s suffering with all the amplification of tragic masks.” It’s true, their performance is the frayed end of a dramatic thread that stretches back in time through Shakespeare to classical Greek drama and beyond. As in life, good battles evil but doesn’t always triumph. Referees, embodying justice, are always dimwitted and undersized. The fighters give it their all, bodies flying through the air acrobatically, faces contorted into the very picture of unbearable pain. Villains play dirty tricks, rousing the heroes’ righteous anger. Members of the audience shout, gesture, and occasionally throw a punch of their own. Violence and aggression are reimagined, contextualized, so that when the last match is done the audience go home with a feeling of catharsis, camaraderie, and maybe even an autographed photo of a favorite as a memento of the evening. The scale is small, the production values modest, the status of both performers and audience is low in the world at large, but it’s an evening of live entertainment, a unique blend of sport and theatre that channels eternal human themes.
Virginia Hines