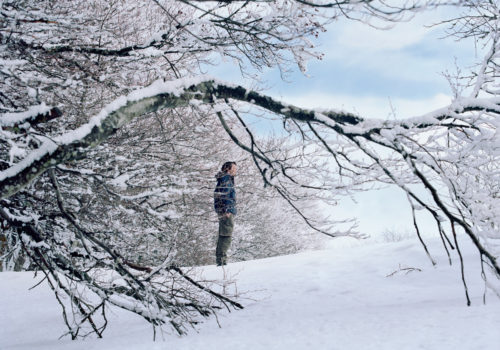 Born in 1976, Vincent Munier grew up in the Vosges, in the heart of nature, with a naturalist father who was an ardent defender of the environment, to whom he says he owes a lot. Produced for Radio Télévision Suisse in 2019, the film L’extraordinaire photographe animalier Vincent Munier by Benoît Aymon and Pierre-Antoine Hiroz takes the step and the pulse of this sensitive and measured being.

Horticultural worker at 20 years old to finance the purchase of his first telephoto lens, then reporter-photographer at L’Est Républicain (“a regional daily newspaper is a good school to learn how to work fast”), he decides in 2002, to dedicate himself exclusively to wildlife as a professional wildlife photographer. In a few years and through his travels at the end of the world (Scandinavia, Hokkaido islands in Japan, Kamtchaka, then the Antarctic islands), Vincent has become one of the greatest wildlife photographers in the world. Each of his photographs is imbued with a hypnotizing dreamlike quality.

The quality of his work has earned him three awards in the BBC “Wildlife Photographer of the Year” competition.

In 2010, Vincent Munier founded the publishing house Kobalann whose objective: is to offer beautiful books of photographs and illustrations, as well as multimedia products (sound, video, web) from the work of artists whose primary source of inspiration is nature. In addition to the obvious influence of his father to whom he regularly pays tribute. As references, he cites the Japanese Michio Hoshino and the Finnish Hannu Hautala. “In my eyes, they capture the essence of the beauty of wildlife. The authenticity of their pictures reveals a long and hard work in the field, often in difficult conditions. Many of their images thrilled me”.

Vincent Munier has adopted the words of Robert Hainard, a Swiss cartoonist and “To fight for nature is to avoid the condemnation of man”.