Vincent Munier – Laurent Ballesta : “The ice cap upside down” : Under the curation of Ashok Adicéam 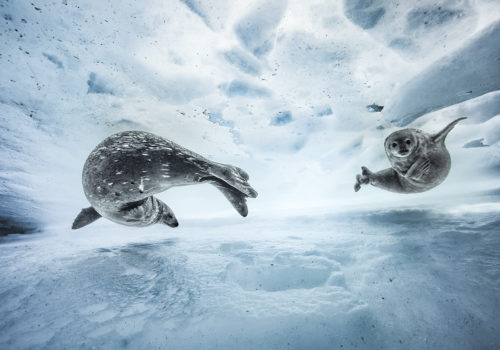 The exhibition “La banquise sens dessus dessous” (“The ice cap upside down”), presented as part of the Polar Summer season, from June 23, 2021 (symbolic date of the sixtieth anniversary of the Antarctic Treaty) until the 10th of October, on the squares or facades of Town Halls in 26 cities throughout France and French Overseas territories.

In the Arctic, on the pack ice, Vincent Munier highlights endangered animal species, in Antarctica, under the ocean, Laurent Ballesta illustrates the underwater world with a naturalistic and artistic perspective:

Stimulated by this complementary duality, the exhibition presented at the same time everywhere in France, under the curatorship of Ashok Adicéam, will bring together a total of 52 images mixing wonders and concerns, and inviting us to question the future of these ecosystems of the end of the world, and more broadly of our planet.

As the planet inexorably warms, ice floes, permafrost, glaciers and ice caps melt dramatically and ocean levels keep rising, our fascination with the poles, north and south, keeps growing. Our concern too, as the Arctic, Antarctic and Subantarctic are sounding the climate alert.

Since June 23, 26 cities in France have been hosting very large format photographs by Laurent BALLESTA and Vincent MUNIER. This manifesto exhibition, curated by Ashok Adicéam, is organized as part of the cultural season “2021, the polar summer”, initiated by the Paul-Émile Victor Endowment Fund, and celebrates the 60th anniversary of the Treaty on ‘Antarctic.

Through their crossed gazes, the duality of the Arctic and Antarctic ice cap is revealed: desert or overpopulated, harmonious or disorderly, silent or deafening. Vincent MUNIER on the ice and Laurent BALLESTA below the surface complementarily illustrate these ecosystems at the end of the world, by highlighting the social links that characterize the animals above and by revealing, below, the marine fauna and lush deep gardens where no one never dived before.

52 different photographs are produced nationwide in very large formats, with two works exhibited in each participating “polar city”. These photographs convey both the wonder and the anxieties of the artists in the face of the disturbances they observe.

Under the curation of Ashok Adicéam