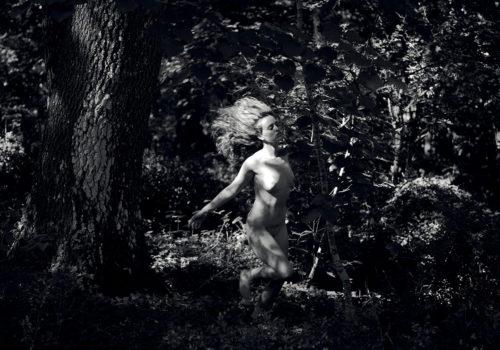 Photography is often an attempt, perhaps the last, to make sense of things, to recompose them through a creative discipline. It represents the place where, at that precise moment, disorder comes to a halt, after the invasion of desire or the pain of loss.

It was Jacques Lacan who showed us the difference between reality and what is real. In the ordinary flow of reality, beautiful or ugly, there is a repetition, a “reassuring” return of the same, a presence of objects to which we give the confidence of stability. The real, on the other hand, is what upsets this picture, something that exceeds and wakes us up from the indolence of materiality.

In this groove can be placed the recent photographic projects of Denis Piel, whose art has always told stories, through images that are never an end in themselves, but rather conceived as plots of life, traces of possible existences.

Born in France in 1944, raised in Australia with studies in the United States, Piel is an internationally award-winning photographer and filmmaker whose work is in the permanent collections of the Victoria and Albert Museum in London and the Museum of Fine Art in Boston. Recognized primarily for his contribution to fashion photography in the 1980s, working for Condé Nast he shot more than 1,000 features in a decade for the American, German, Italian, French, and English editions of “Vogue,” for “Vanity Fair,” “Self, Gentlemen’s Quarterly,” thus interpreting the evolution of costume and society over time.

After the tragedy of Sept. 11, 2001, he decided to move with his family permanently to Lempaut in southwest France, living and working at the Château de Padiès, a Renaissance château under restoration since 1992, turning his attentive gaze to nature and the work of the land.

Thus were born the two photographic projects Down to Earth and Padièscapes, presented at Villa Pignatelli for the first time in an Italian public museum, which are to be conceived as a true hymn to life and the entire cycle of existence.

The first three rooms of the exhibition host a selection of shots from Down to Earth.

With these works, Piel has made a reflection from participatory observation of agricultural work on the farm surrounding the Château de Padiès and its gardens, where with his son Olivier he has initiated, according to the principles of permaculture and sustainable development, an experiment in agroecology.

Conceived as a return to the earth, to the essentials, and thus as a rebirth, the series consists of powerful images, fragments of a day, celebrating nature and fertility, a true hymn to life and at the same time a call to safeguard our planet from unstoppable climate change.

Through a sequence of black-and-white shots, taken digitally with a Hasselblad H4D, the author portrays the natural world, revisiting classical mythology while dialoguing with the history of Western art of the late 19th and early 20th centuries, highlighting the similarity between us and the plant world, maintaining a constant thread with the art of the past. Cultivated land, forests, harvest products, male and female bodies at rest and at work, nudes like nymphs and satyrs, weave parallels with iconic works and myths. One hand digs the earth, another holds out two eggs; a group of active ants wander in the corolla of a flower; a wheelbarrow with a single wheel seems forgotten in the fields but returns to work pushed by Olivier; a naked girl mingles with the earth.

Walking through the subsequent rooms on the second floor of the Villa, one encounters photographs from Padièscapes, a project presented here in Naples as a world premiere, which can be conceived as an extension of the meaning of Down to Earth, focused, however, on a specific aspect: water combined with images of flowers.

Using a plexiglass cube filled with water as a tool, mixing colors, almost like a child’s game, he managed to achieve three-dimensionality, and, as he puts it, regain “that innocence to which so many artists would like to return.”

The images appear as true pictographs, triumphant still lifes of ancient memory, which seem to offer the artist the opportunity to fulfill a challenge between technology and a return to the manuality of photography making, through the subversion of space-time and the choice of an element, light, which allows us to travel from the smallest detail of a flower, to a more distant and intangible dimension.

A photographic quest, his, that makes us realize how much, as we explore the environment, our attention stops on certain objects creating a territory of affective markings and aesthetic indexes that will remain wrapped in a temporality that includes the past in the form of memory.