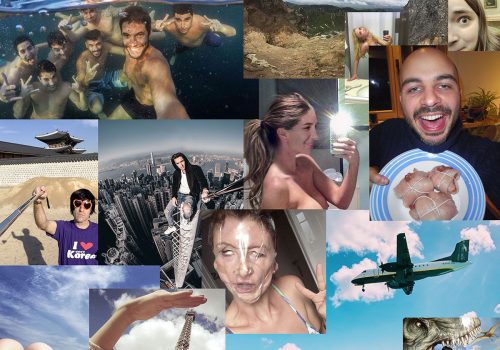 Olivier Culmann is the curator of Selfies Ego/Egaux, assisted by Jeanne Viguié. This is his introductory text to the exhibition.

Photography has undergone a true revolution in recent years.

Since its creation, the camera has been directed – following our eye – from itself towards others, but its direction has suddenly been reversed.

I have long wondered about the cause of this inversion, back to ourselves. Like many, I initially believed it to be merely the expression of an individualistic era and consequently of purely egocentric behaviour. The Seoulfie series, which I made in South Korea in 2014, stems from this question and offers a “visit” of Seoul using this ego-portrait process.

Why did we, at a given point, feel the need for this inversion?

The word Selfie was first used in 2002 by a young man who took a photo of himself, more specifically of his mouth injured after a little too much to drink one evening, to send to doctors for a diagnosis. This is the landmark, as, although the word was only to appear in the dictionary some ten years later, this founding anecdote is now part of the very definition of the term Selfie: it is a self-portrait created to be sent to one (or more) third parties.

Thus, the Selfie’s prime function is as a means of communication (and so being, the Selfie may even be stripped of the need, inherent to photography, for permanence: a Selfie may disappear once received, like in Snapchat, for example).

There was a time when we would send one another letters, then when we would phone each other, next came text messages and now we send photos of ourselves to tell people what we’re doing: “Look, I’m at the beach, I’m happy, so I’m telling you”.

As such, contrary to most photographic types, Selfies do not need to be aesthetic to exist. To the contrary, they are more accessible and obtain a greater response when they are visually “modest”. Many might therefore scorn them for their aesthetic “inanity”, constantly reducing them to their egocentric nature. One has every right to dislike them, but we cannot deny that they prolong the history and evolution of photography, which has gradually become more accessible to a broader audience.

As for myself, I would not be surprised if, in a more or less distant future, the Selfie – like many other sorts of “non-professional” photographic types – , were to provide us with more information on our era, our societies and our lifestyles, than so-called documentary or journalistic productions.

To take things a step further, I would even say that the interest of photography often resides not in what it shows, but in what we may learn of ourselves from its form and the way we use it.

Opening in the presence of the author on Thursday, September 24, 6:00 p.m.