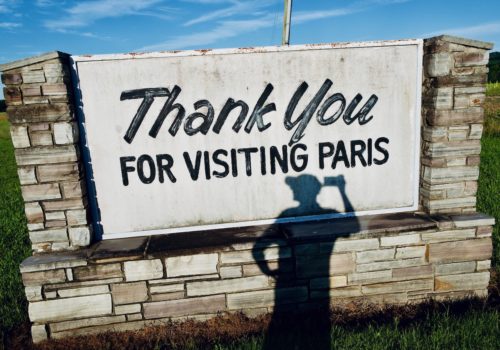 If most of us have heard of Paris, Texas thanks to the Wim Wenders’s film (it won the Palme d’Or at Cannes in 1984), we often forget that several other American towns are named after the City of Lights. Victor d’Allant, a French-American visual anthropologist, recently visited seven of them for his “PARIS, USA” project.

Equipped with a small digital Leica camera, he came back with unique visual vignettes. One of them shows the Paris, Kentucky Eiﬀel Tower, which may be only 3 meters/10 feet high but still is a symbol of Bourbon County, named after the French royal family (and hence the famous whisky!).

His portrait of an artist in front of an Eiﬀel Tower covered with a red cowboy hat (“It’s Texas, man!”) might make you smile, as will the sign announcing you are entering Paris, Idaho: “Population: 479”

“A certain pride in being associated with “the other Paris” can be felt in these towns,” explains Clément Thiery, journalist with France-Amérique magazine in New York. “These communities were founded in the 19th century and their names reflect a time when America was fascinated by the Storming of the Bastille and the Marquis de Lafayette, the French hero of American independence.”

With his photos, Victor d’Allant went beyond the anecdotal. He noticed that those small towns, most of them located in the Mid-West and the South, are facing an economic and social decline. Located just a few hours south of Chicago, Paris, Illinois (pop. 8 300) has never quite recovered from the closure of its broom factory. And if the pastor in Paris, Tennessee is proud to wear her blouse printed with Notre-Dame and the Eiﬀel Tower, she is posing in front of a statue remembering the members of the Black community who were buried in the local cemetery’s mass graves.