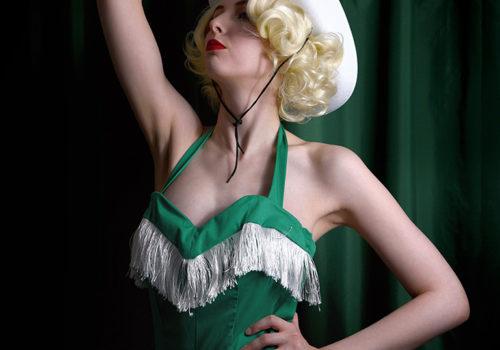 made in Hollywood by Jean-Paul Gavard-Perret

A specialist in portraits, the British photographer Vicky Martin shakes up the vision with effects of inappropriate but never exaggerated vehemence. Her new “expectations” have fun playing with classic Hollywood stereotypes of femininity.

With “Hollywoodland”, the photographer explores the identity and emotions that are created by her “made in USA” scenarios. The humor is ever present and proves how stereotypes conflict with what it means to be a woman.

The artist’s goal is always the same: to convey emotions and combine them with contradictory feelings of ambivalence and challenge. Her characters are submerged here (the less they pretend to be) by the pressure of the cinema to conform to the Hollywood feminine ideal.

But, beyond that, Vicky Martin illustrates the pursuit of an ideal of feminine identity. In this series, the artist takes us back to the 1950s, which often led women to experience intense feelings of loneliness and isolation.

At that time, they were shaped to become “a saccharine image” of the actress created to turn into fantasy machines.
Jean-Paul Gavard-Perret

My endless fascination with classical Hollywood cinema, and the role of women within society that is propagated through the silver screen, has inspired this series. Hollywoodland is a series of portrait photographs that convey both the aesthetics of the era and the deeper issues of gender that began to surface particularly within the 1950s and 1960s.

The protagonist within the series emulates the ideal of the Hollywood blonde, who was made desirable by the likes of Marilyn Monroe, Grace Kelly, and Lana Turner, among others, manipulating her natural image to conform to male perceptions of beauty, as after all “gentlemen prefer blondes”. Each photograph contains the clapperboard, upon which is written a film title taken from the golden era of cinema, that intends to simultaneously add meaning, and ambiguity, to the emotions conveyed visually by the protagonist, who is acting out roles perceived as necessary to the female, albeit in a glamorous, stylised way informed by the fictional lives of women seen on screen.

During the golden age of Hollywood, women were led to pursue unattainable ideals of beauty, of femininity, and of their domestic role within society, which inevitably led to feelings of confusion, of inferiority (both towards men and in terms of their natural beauty), and of unfulfillment. My intent is to convey the overwhelming social pressure to conform to such ideals, which is glamorised by cinema and thereby internalised by the female.
Vicky Martin

Vicky Martin is an acclaimed British photographer with a background in art and design. She is best known for her conceptual portraits depicting the conflict between themes of fantasy and reality and strength and vulnerability, especially in relation to the female experience.

Vicky intertwines her created characters with staged realities, which seek to convey the tension and conflicts found within the self. Throughout her work she likes to explore, through strong female characters, recurring themes that she is drawn to, which include: conformity to the stereotypical, individual and societal expectations of femininity, vulnerability and self-doubt. Whilst all her works contribute to the narrative framework developed across her series’, they also each depict an element of ambiguity that the viewer is invited to interpret in relation to themselves and their unique perception of the world.