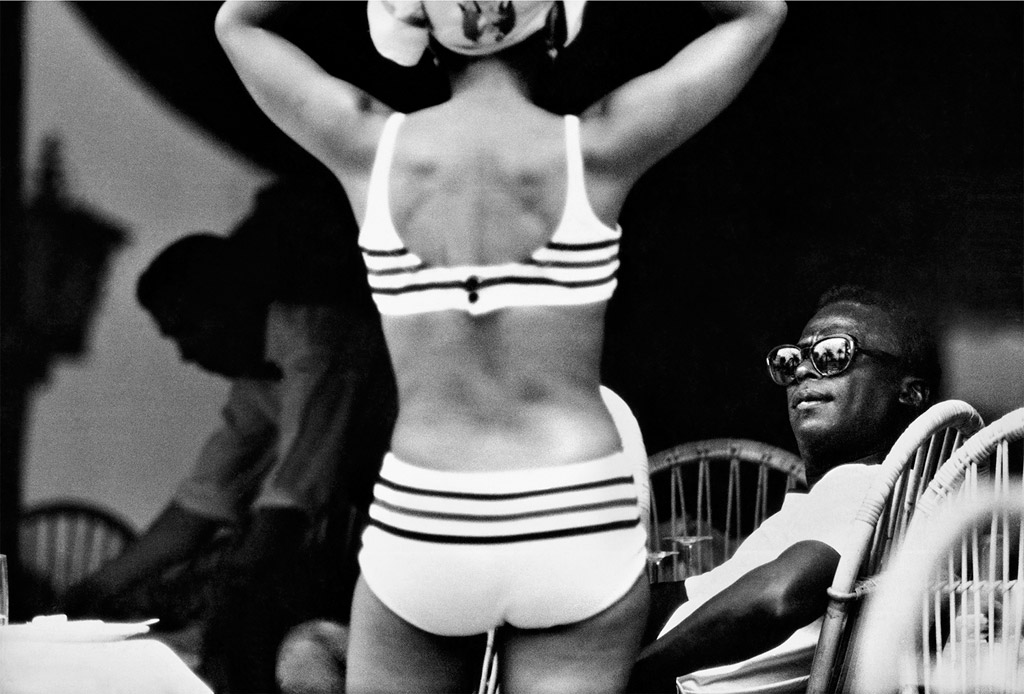 The fourth edition of the PORTRAIT(S) festival of Vichy opens its doors today. Until  September 4th Vichy is an outpost of today’s photography for a season and is presenting to the public some exhibitions centered exclusively around the art of the portrait. This new edition is showing nine artists whose exhibitions are taking place simultaneously in the city centre and outside , in the open air. L’Oeil de la Photographie brings you the work of one photographer from the programme every day. Today focus on « Sous le Soleil exactement » by Jean-Marie Périer.

“When he started photographing his models, Jean-Marie was hardly older than they were, barely twenty-three years old. Just a few months before, he did not even know that Johnny Hallyday existed. He was still in Algeria, because of the war there, doing his military service. The first time he heard Johnny sing was one Christmas evening on Radio Oran, and the chorus line “Retiens la nuit” (Hold onto the night) strangely resounded through a city where bombs were exploding at every street corner. It may have been that Christmas when the sixties began. And a chance meeting with Daniel Filipacchi, whom some of us still call “Uncle Dan”, led to a very young man being given the job of photographing other young people for a magazine that had just come out. (…) Looking at these photos fifty years on, what I see in them is not the past but the present, that insouciance that makes one forget about tomorrow and yesterday, and live simply “the virginal, living and beautiful day”.
That is the privilege of youth, for whom time does not exist. Nor space: whereabouts exactly are Johnny, Chris, Dick or Eddy? They are in their dreams of an imaginary America, one probably more real than the real one, since dreams are contagious and you end up imposing them on others, especially when they have the force of childhood or adolescent dreams. Then there were those magic moments when we were fifteen, when the slopes of Montmartre and Belleville opened out onto the plateaux and valleys of Arizona and Colorado. It was enough to go into a local cinema to see “Calamity Jane” or “The Wonderful Country”. And there were the afternoons and evenings during the same years when you heard Elvis Presley for the first time on the jukeboxes up at the Porte de Clignancourt. That’s when the slightly less gray skies over Saint-Ouen became the so deep blue Texas sky. With a simple click, simply by intuition, Jean-Marie Périer fixed the dream for all time. He had the eye for it.” – Patrick Modiano