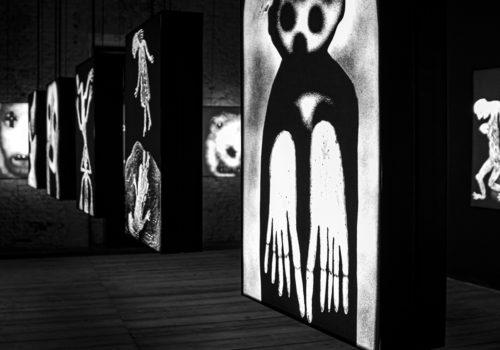 When Roger Ballen was selected to represent South Africa at the Venice Biennale, we immediately realised that his photographs from ‘The Theatre of Apparitions’ would be the best choice. This series was created during an eight-year period from 2005 to 2013.It was called a Theatre as a lot of Ballen’s work can be seen as Theatre. As Didi Bozzini wrote’ The embodiment of Ballen’s internal psychological excavation leads me to consider his work as a ‘theatre of the mind’ articulated in 5 parts: Theatre of the Absurd, Theatre of the Real and Unreal, Theatre of the Hidden, The Forbidden Theatre and Theatre of Darkness. Colin Rhodes wrote about these images in his introduction to the book ‘These are spirit drawings. Or rather, they are photographs of visual reports from some psychic somewhere.’

The resulting book was published by Thames and Hudson in 2016 and an animated film ‘Theatre of Apparitions’ was released in the same year.

During the period we worked on these images, we worked feeling our way into new territories.

Through trial and error, using various techniques, we were eventually able to establish methods that culminated in imagery of a new dimension. These have been likened to prehistoric cave paintings on which thoughts and emotions were portrayed. The images were rarely planned and were instead the results of a spontaneous process in which the choice of material sometimes created magical and inconceivable outcomes. They share a complete absence of conscious awareness. They are all born out of the unbearable, the unacceptable and even the unthinkable.

When looking at the space available in the South African pavilion, we realised that we did not have enough space to present enough of the work to make a comprehensive exhibition. Instead, we came up with the idea to show the work as double-sided light boxes. As these figures represent the place in which dreams manifest themselves, we decided to suspend these light boxes from the ceiling as though floating in the air. We made sure that the space was dark enough to create the atmosphere we wanted. The resultant juxta positioning of the ghostlike figures against the old walls made the exhibition powerful and other worldly.

We were pleasantly surprised by the reaction of the visitors from diverse cultures and countries. People all seemed to be drawn to the images and nearly everybody experienced a strong emotional response. They identified with the deeper meaning as part of their own psyche. More than in any other exhibition we have been involved in, nearly every person in the room took photographs. The fact that the images were illuminated contributed to the otherworldly ethereal experience.

The fact that Roger Ballen is better known for his strong black and white photographs from his other series i.e., Platteland, Outland, Shadow Chamber, Boarding House and Asylum of the Birds, made this exhibition a totally new experience showing the versatility of this well-known artist. As this is the first time Ballen showed these images in light boxes, it completely changed people’s perception of this body of work. It is as though these figures were woken up from a long slumber and brought ‘into the light’. This was very fitting as the theme of the South African pavilion was ‘Into the light.’

In his artistic practice Ballen has increasingly been won over by the possibilities of integrating photography and drawing. He has expanded his repertoire and extended his visual language. During this exhibition his use of drawing and his willingness to explore other avenues became apparent to the viewer who is not so familiar with all his work.

The Theatre of Apparitions show by Roger Ballen is presented at the South African Pavilion of the Venice Biennale. Marguerite has been Ballen’s artistic director for 15 years and was intricately involved in the creation of the project.