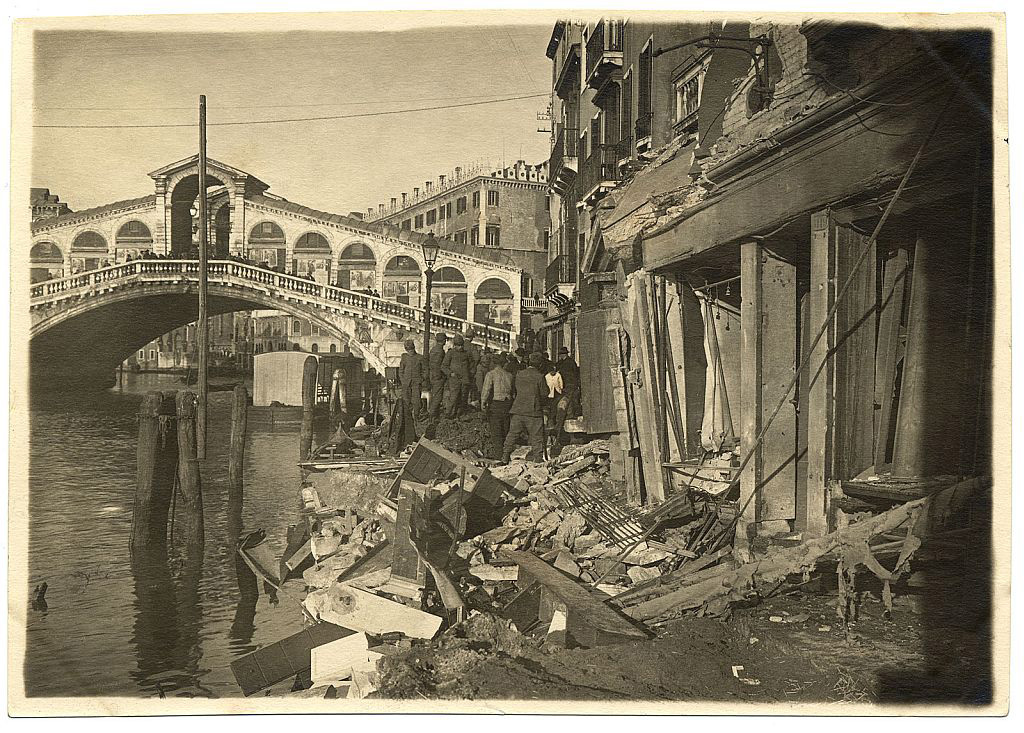 Dawn, 24 May 1915. Venice had its first awakening of war from the sky. The city heard the wail of the air raid sirens, then there was a long wait interrupted by the rattle of the defence guns, and the thump of the bombs dropping into the water of the lagoon. A century after the beginning of First World War, “Venice defends itself 1915 – 1918”, curated by Claudio Franzini and based in Palazzo Fortuny, tells us the unusual situation of the city at the time of the Great War with 350 original photos from the Archivio Storico Fotograﬁco of the Fondazione Musei Civici di Venezia: an overview of the dramatic nature of the events, focusing both on historical perspective and collective memory.

In that first day of the war, the city was not caught completely defenceless. Although its defensive organisation was still incomplete, squads of lookouts had been formed and were stationed lying in wait on the roof terraces day and night to sight the enemy. There were soldiers, as well as the Venetians and the many volunteers who rushed there, among whom writers and artists. ‘Keep watch on the air!’, was their cry, coined by the armed poet Gabriele D’Annunzio. Sensory devices were invented to hear the roar of the motors. The city waited below with anxiety for the crash of the bombs. From 1915 to 1918 there were 42 air raids dropping a total of 1029 bombs on the city, causing material damages and  52 victims among the population.

Carlo Franzini, explains to us that, “besides its historical and symbolic value, the exhibit is interesting for its intrinsic photographic value. Many of the images go beyond the mere documentation of actions and events: they have been shot by well-established professional photographers, like Tommaso Filippi or Giacomo Giacomelli. You can perceive a professional “eye”, an aesthetic criteria. Most of the photos have been shot with large format cameras, but “portable” cameras supplied to the army and navy have often been used for the effects of the bombings”.

The exhibition gathers what the civil and military authorities did to protect the artistic heritage from the effects of the bombing, without forgetting those who defended Venice from the impending threat. In these pictures we see an unseen Venice, a city dressed for war. The removal of the paintings from the Doge’s Palace, the Accademia and the churches began in April, during the general mobilisation of 1915. The defensive strategies were concentrated in the complex task of protecting monuments, with sacks and reinforcing masonry. So Venice had its new garment thought to defend it from a threat that became a real danger on the very day war was declared. It was an “armour” made with padding, sand bags, mattresses of dry seaweed and fences, which distorted the city’s appearance.

“The records of the destruction of the frescoes by Giambattista Tiepolo in the Chiesa degli Scalzi were of great emotional impact: the masterpiece was irretrievably lost, which caused a strong international reaction also because people connected it with what was occurring on other fronts, such as the bombing of the Reims Cathedral”, Franzini adds

The massive involvement of civilians was the “novelty” of First World War and the exhibition illustrates the difficulties of everyday life: blackouts, shelters, ruins, but also the response to these events, with a general mobilization of all the citizens involved in the defense of the city and of its monuments. A huge amount of work, done in a very little time, because Venice, for its particularity, was thought  could not  be touched by the war. But the first aerial bombardment of the city was on that first day of the war “, Franzini says

The exhibit is the first project fulfilled after the Memorandum on cooperation between the Fondazione di Venezia and the Fondazione Musei Civici di Venezia, for the promotion of the artistic and cultural heritage of the city, mostly of the photographic one.

Produced and organized by Civita Tre Venezie, it is accompanied by a catalog (Marsilio Editori), with essays by Cesare De Michelis, Camillo Tonini and Claudio Franzini.