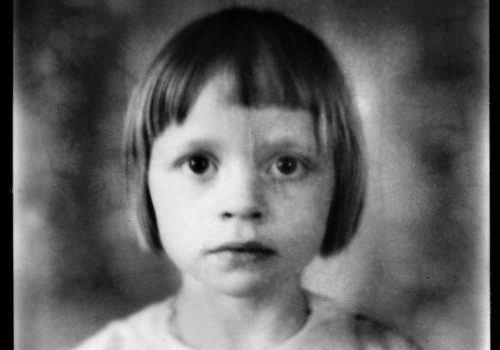 Born in Israel in 1967, Michael Ackerman moved with his family to New York in 1974. At 18 he discovered photography as a personal form of expression and truly came into his own in the art. He left his college studies behind and has devoted himself with utter dedication to his photographic work ever since. In 1992, Ackerman embarked on an extended journey that took him from Manila to Calcutta and on to Varanasi, the holy city of Hinduism, home of the terraced Ganges riverbank where both ritual baths and religious cremations are carried out by the thousands, virtually side-by-side. In 1997, after extensive travels, the work on what would be ‘End Time City’ was completed. Published two years later by Delpire in Paris, the book subsequently received the prestigious Prix Nadar.

The pursuit of “the story” that could have established Ackerman as a conventional photojournalist was relinquished in favor of a work method that brought the naturally retiring photographer into direct confrontation with an inner agitation, a friction between reticence and unrestrained curiosity, which is perhaps the delicate balance of intimacy and distance that connects him what he sees. The thread of Ackerman’s sensibility for time and timelessness, for his own history and the historically charged quality of places has been woven through his work from the start.

The utterly non-academic work with the photo camera has brought Ackerman highest acclaim: his purposeful use of exposure errors, overexposure, blurriness and movement serves, in effect, to conquer the coldness and rigidity of technology, giving the floor to the unbridled expression of the image. Younger generations of photographers regularly acknowledge Michael Ackerman among their greatest influences.

Viewing his images it is impossible to escape the pull of their extraordinary intensity. In addition to earlier works from India, New York and Eastern Europe our show also presents the most recent photographs and assemblages, images that Michael Ackerman took at the Warsaw Jewish Cemetery. Michael Ackerman has travelled the world in search of existential human expression also finding it at the place of his own family provenance, revealed in perhaps the most delicate, fragile form possible: images of the little weathered portrait photos of children at the Warsaw cemetery. Like a muffled scream that, through Ackerman’s work, now echoes into the present after all.

Michael Ackerman received the New York City’s International Center of Photography (ICP) Infinity Award in 1998 and the Nadar Award for his book ‘End Time City’ (Delpire, 1999). His work ‘Departure, Poland’ was honored with the SCAM Roger Pic Award in 2009. Ackerman’s much-talked-about book ‘Fiction’ appeared in 2001, his most recent book ‘Half Life’ in 2010, both published by Delpire.

Since 2010 Michael Ackerman has been based in Berlin.