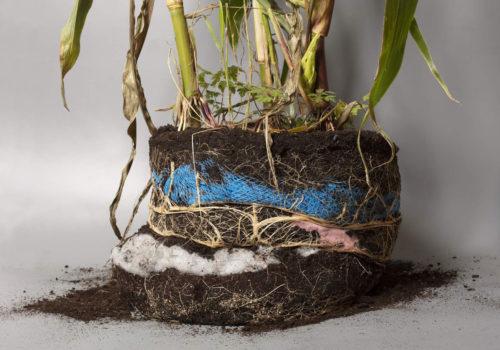 Tania Franco Klein | The glow of cinema images in the dark
Tania Franco Klein is an artist from Mexico making her Dutch debut. Her presentation at UNSEEN takes one entire wall with both new work and a selection from her young oeuvre. The public moves with her through an imaginary travel diary, encouraged by its title ‘Proceed To The Route’.

Sjoerd Knibbeler | In Elements
There’s such a large part of reality that is invisible! Thanks to scientific knowledge, people are gradually finding out more about what moves deep inside the earth, how air flows and winds blow, how water moves around a ship or how clouds change shape. These may be very real and physical phenomena, but how can they be photographed? Or better still: what does it take to create such an image?

Diana Scherer | Wonderground
Diana Scherer is a visual artist and one of the pioneers in biotech art. She works with root systems of plants. Her studio is an artificial biotope, where many shades of leafy green light up. Here, she allows natural tissues to grow into works of art. Scherer presents the underground crops and root networks of her plants as a tapestry, but she also integrates them into photo works, as living sculpture, or as textile

Marjan Teeuwen | Destroyed House
Demolished buildings are Marjan Teeuwen’s field of activity, and her audience also encounters clutter, construction waste, and dust. Under the title Destroyed House, Teeuwen creates sculptures of discarded buildings in the Netherlands and abroad. She has worked in Rotterdam-Zuid and Amsterdam-Noord, but also in politically sensitive areas across the border, from Siberia to Gaza. Destroyed House is a multifaceted monument to the human condition, which appears rock-hard, but is as transitory as life itself. Still, the photos that Teeuwen creates of it escape the tipping point. Here, chaos and order are evenly matched, in a radical reversal of the urge to destroy.

SinArts Gallery is excited to bring the amazing photography of Shen Wei to Amsterdam UNSEEN. After a successful solo presentation at the gallery in the spring we are looking forward to bringing new works to Amsterdam to be shown with some classic Shen Wei images which have been covered by many international media, including l’Oeil de la photographie / Eye of Photography.

Shen Wei is a Chinese-American artist based in New York City. He is known for his intimate portraits of others and himself, as well as his poetic landscapes and still-life photography.  His work has been exhibited internationally, with venues including the Museum of the City of New York, the Philadelphia Museum of Art, the Power Station of Art in Shanghai, China, the Hasselblad Foundation in Göteborg, Sweden, the North Carolina Museum of Art, and the Museum of Contemporary Photography in Chicago. His work has been featured in The New York Times, The Guardian, The New Yorker, CNN, Aperture, ARTnews, Paris Review, Financial Times, Le Figaro, and American Photo.

For its debut presentation at Unseen, Singular-Art will feature new work by two photographers dedicated to their craft, albeit from wholly different viewpoints. Julius Thissen is a young Dutch photographer and artistic researcher based in Arnhem.
Their performance-based practice involves themes of connection, failure and their personal experience as genderqueer trans masculine individual. With Turnbuckle, Julius presents his first work made with a mid-format camera, featuring a model clad in fighting gear taking on several contorted strong-man poses. Yvon Ariese uses high definition scanners to capture processes of decay and growth.
In highly detailed, ‘slow’ photographic images she manages to capture the hidden grandeur of fairly mundane natural occurences. Images of submerged flowers, dust traces on a scan plate and drifting clouds evoke a sense of cosmic melancholy.
Singular-Art
6511 XR Nijmegen+31 6 20801765 [email protected]www.singular-art.com

Mary Sue (UK, 1979) (assumed identity) uses color to a poignant effect in performances rendered as videos, photographs, art objects, and drawings. Under her sobriquet adopted while at the ENSA of Dijon, she has had exhibitions in France, Belgium, and Italy and has participated in Art Basel, FIAC, and Art Brussels. Mary Sue’s working method, deploying the most advanced digital means, involves a critical reading of real places and situations through the prism of her cartoonish alter ego.

Abstract, austere and instantly intriguing, Theis Wendt’s illusionary works consider the human thirst for authenticity at a time when our grasp on reality has been transformed by technological change. What happens when nature can no longer be considered authentic, or when an image loses its referent? Here, his puzzling pieces offer a peeping portal into the wider presentation. Venetian blinds set in pools of resin, their slats occasionally protruding, are neither objects nor images, but locked in a state of flux. Standing before Wendt’s double-sided windows, we soon start to wonder whether we’re gazing in, or if we’re looking out.

Illusion and intrigue continue in the peculiar world of Asger Carlsen, who presents a set of his signature black and white photo-manipulations. Each one is a careful composite of multiple seamlessly-bound images, showing recognisable yet contorted components of a human figure – be it the ridges of a spine or the contours of muscle under skin. But Carlsen’s digital renderings create something unfamiliar, alien, and at times, overwhelmingly haunting. To complete the disturbing effect, his reimagined bodies – stripped forever of their primary function – are displayed on shelves like sculptural ornament

For stylist, fashion director and photographic artist Katie Burnett, inky black and white representations of the human form are also a running fixture, namely in the shape of various inventive self-portraits. With little to photograph during periods of paralysing lockdown, Burnett turned the lens on herself, her cats, and her immediate surroundings, using household items – from rubber bands to ramen noodles – in an ingenious game of play. The resulting images were brought together in her first monograph, Cabin Fever, published by Art Paper Editions in 2021.

Where Burnett’s project can be understood as a joyful act of self-expression. Pacifico Silano’s work has markedly heavier undertones, whilst also speaking deeply to his own identity – and to that of a wider LGBTQ+ community. Spurred on by the erasure of his uncle’s story, who was himself lost to the HIV/AIDS crisis of the 1980s, Silano turned to gay pornographic magazines that preceded or aligned with this time period; the kind of images his uncle might have looked at. Rephotographing sections of the magazines as a foundation for new works, Silano highlights the tension between the sexual liberation of the 1970s and the tragic sense of loss that followed, as well as dissecting representations of an archetypal masculinity that the magazines proffered.

Anima Mundi vs. Génesis, an encounter of realities.

Two bodies of work with the same principle, the soul of a society, which is confronting and adopting the contemporary standards and “rules”.

Máté Bartha’s Anima Mundi project has the idea to create an upside-down summary of everything we might know about how the world works. Anima Mundi mixes pure observational street photography, with staged photography and installations, all strictly set in urban space. The actuality of his work is the growing desire for a leading thought, a “big plan” in today’s age of parallel truths and fragmented knowledge. Global uncertainty always fuels the appearance of alternative philosophies, and when one can read on the same magazine cover about pandemics and possible dates of complete extinction, the craving for a higher reason is stronger than ever.

For Juan Brenner, the Guatemalan highlands define their identity in so many ways. He is fascinated by the beauty of the region but more than anything by its complex reality. Brenner reaches deeper into a new aesthetic developing up in the mountains, those densely populated towns are a vast source of images, images that document how the new generation understands their origins and are shifting to new trends, especially for their attire, their way of absorbing globalization and the genesis of a new “bourgeoise”. Génesis’ body of work focuses on, a new aesthetic, economics, globalisation and the inevitable abandonment of very old practices that once defined Guatemala and its inhabitants as a nation; as a territory.

Last year Past and Present was introduced at Unseen Amsterdam. In edition 2022 Ton Peek Photography confronts LIONEL WENDT (°Ceylon 1900-1944) and LAURA STEVENS (UK °1977) but who lives & works in Paris.

Wendt & Stevens both focus on the male nude, but with a difference of several decades, with a zeitgeist that cannot be compared at all, with a different gaze as Lionel Wendt worked in the 1940s,

And Laura Stevens started her project in 2019. She specifically wanted to investigate whether being a woman would give a different view of the male body.

If there is a wide difference between the two photographers, there are also similarities. Both photographers distance themselves from the subject, which translates into a compelling sublimated silence. They also share a preference for the aesthetic & excelled in their mastery of darkroom techniques.

With a world in chaos, a war happening in Ukraine, a possible war escalating in Taiwan, environmental issues bigger than ever before, and at the breaking point of a World War 3, there seems to be little hope for our human race. Our curated setup this year for Unseen points to the serious problems we are facing, but at the same time giving space for joy and hope. It’s been important for the gallery to show support to our fellow artist in Ukraine. With the help from Unseen and the government of culture in Ukraine, we have managed to give Sergey Melnitchenko permission to leave his country for the duration of the fair. All artists will be present during Unseen.