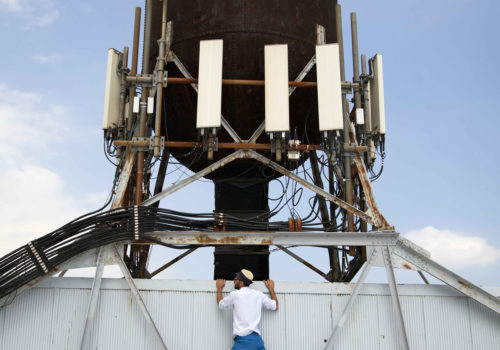 In the ancient theatre in Arles this Saturday, a film will be projected on the street artist JR, who will also hold a conference. Last week he was working in New York on his new project, Inside Out. La Lettre followed him on the streets, on the scaffoldings and on the rooftops.

At 4pm, JR is nowhere to be seen. Behind the blue wooded barricade, a dozen people covered in glue are devoted to covering a large wall in with eyes staring in black and white. More then 30 minutes more will tick by in order to see suddenly the face of the elusive artist, up there, on the roof of the building in front of us, waving like a kid. A few more minutes of waiting until he bursts on his Solex, telling how the owner made him visit Marina Abramović’s old apartment. JR parks the bike, brings out cans of powder glue from a bag that he mixes with water in trays and rejoins his team to work. The interview will take place on the top of the scaffolding. “I will climb up to paste, you can sit on the roof just over it. We’ll be ok to talk, face to face.”

It’s here in Soho, at the corner of Wooster and Grand Street, that JR decided to begin his exhibition on the streets of New York. The colossal image of this Native American that will gaze night and day at passersby, is the protagonist of his last project, Inside Out, launched three months ago. The concept: to gather portraits of people all over the world on a website, print them in extra large format, mail them, urge them to put them up, and for those who wish, to send a message. On the Indian reservation in Fort Yates, North Dakota, they pasted the posters everywhere, attracting the press and reminding the region of their existence. JR aims at the same symbol in Manhattan which, according to the legend, was bought from the Indians for 24 dollars by the English pioneers, only to be later exterminated all over the United States.

Earlier, in March, JR went to Tunis, also in the context of Inside Out. Through the continuity of the jasmine revolution, there was a need for a strong act. Six Tunisian photographers traveled all over the country in search of a hundred portraits of their fellow countrymen. The posters have finally covered the walls that Ben Ali was using to paste his face and control his propaganda. Their photographs have finally been made into a book. “Most of the people receive their portrait and hung it in their houses, or stay quiet. But many of them have used them to channel a message. If Tunisians or Iranians paste them in their windows or streets, it means they have something to say.”

With Inside Out, JR expects to restore the speech of those who have possibly lost it, as previously in Brazil and in Africa. As far as that is concerned, the project is open to everyone. The artist states: “For once, it is not mine, it belongs to these people, those who have decided what they wanted to do with their image. They manage their walls and their messages. They don’t need me or my notoriety. It’s their own credit. I’m just the printer.” A cheap smuggler. The asking price for sending the portrait in large format is a donation of 20 dollars. Those who cannot pay, do not pay. Every donation offers its image to three participants. That is called participatory art. In JR’s Parisian atelier hundreds of portraits are printed and mailed everyday, in an envelope shaped like an eye. They are delivered to all corners of the world.

On his platform, JR shakes. The structure is wobbly on it’s right leg. Speaking as he pastes the last parts of the Native American’s gaze, he realizes that time is scarce. An electric character, traveling non stop, always wearing a three piece suit, hat, glasses. Since 2005 and “Portraits of a Generation”, the man has traveled the continents in search of his identity. His largest illegal action was perpetrated in the Middle East. In 2007, on the Israeli-Palestinian border, he pasted portraits of Palestinians and Israelis performing the same job. The image traveled across the entire world. JR also hopes to create a dialogue. “I have never stated that the wall in Palestine should be torn apart, I just wanted these people to shake hands.”

Since his debut at age 17, JR has conducted a true urban epic. In October 2010, he received the sought after TED Prize, being the youngest winner. A prize devoted to all manners of innovation and awarded by the Sapling Foundation, a North American foundation devoted to, according to their own words, “ideas to change the world.” However, the critics were not unanimous. ‘Women are heroes,’ his film launched last January, was a deception. It has been criticized for having used human tragedies to create a big communication blow, and for not having been interested in personal stories, for having delved in self celebration. Through hanging their portraits in their villages, he insists he was looking to bring dignity back to the wounded women.

JR is the perfect ambassador on the discussion of street art. As Bansky, the London stencil grafitty artist, he sells his works in galleries, around 20,000 and 50,000 euros, also creating partnerships with museums. What was meant to be free in the streets, has turned into a way of making a living. JR produces his gallery work according to his needs. The money is then used to finance larger projects. “The debate over my notoriety doesn’t concern me, he replies. We work as a team. Sometimes we are 10, sometimes 100, like in Paris in 2009. There wouldn’t be so many people if all these projects were only to target one person’s ego. I am like a ‘tagger’ that tags the name of others, only the photograph has replaced the graffiti. The people behind are not puppets.”
Whether rigorists like it or not, JR has developed a form of art, today democratized, that denounces the lack of cultural aids, the indifference from politicians, and the appropriation of artwork by corporations. Despite this delicate position after the explosion of his value as an artist, JR is categorical: “I’m not a multimillionaire. All financing from art comes from publicity, brands, foundations or a phone corporation that pretends to want to save the world. But instead, they appropriate the creations to communicate their brands. I have decided not to participate, which is a real combat. I am doing my best to avoid the images from the people that are participating in Inside Out to be reappropriated .”
Despite the fact that his work is political in its manifestation, JR has refused to have any indirect connotations. He only hopes to give another vision on an event or the environment of a population, different to the one we know through sensationalism reportage. “I am not an activist. An artist must raise questions instead of giving answers.” Eventhough we are now more familiar with his looks, he tries to keep some anonymity. “You’ll never know much about me. You will know that I’ve lived in the western suburbs of Paris, and that I am 28 years old. In Mongolia or in North Dakota, no one knows who I am and no one cares.”

As the formality of this interview comes to an end, the one who condemns all the titles that we have tried to put on him (‘artiviste’ or ‘photograffiste’) holds a paint gun, preparing himself to sign the wall, and stamp a phrase: “Image to the people”. He accepts an improvised and funny photo-shoot before proposing a new encounter, a few days later, in the Bronx, this time to participate in the work.
This time JR has changed his dirty black t-shirt for a Parisian hyped style. At Hunts Point, his young work team bursts with energy and is ready to begin yet another poster project. The wall, JR’s exclusive form of expression, has always been a way to decode a city. “When the walls are white, it means that there is no freedom of speech, which makes me crazy!” The walls of the deprived areas have the most beautiful graffiti in town. Here, that freedom is not ready to be mocked. JR has laid his mark, just as Obey and the others: portraits of neighborhood residents watching another resident in front of them.

For the main poster-man, there is however some dramatic action missing from the day, a dose of adrenaline similar to the one that would run through him when the illegality would make him jump over Parisian rooftops. JR and his one-day-apprentices get into the van and gather again a few blocks further. We follow them on top of a building facing Manhattan. A typical New York water reservoir sits on the roof. JR climbs over wood and ladders, grabs the long brush and prepares the glue to paste a giant portrait of a Bronx child. In order to move the ladder on which he is working, he must perform small skillful jumps. Finally, the poster is laid, watching with mischief the drivers over the highway.

As he comes down, the Sun is ready to set. We finish our meeting on a memory. A memory from when he was starting out with Emile Abinal, his PR person then student at the Ecole du Louve, when he would work with him at his Parisian studio, on the floor, by the bed where his girlfriend would still be sleeping. As we say our good-byes, JR picks up his tool, swings it over his shoulder and starts his way on foot, ahead, alone. Most certainly thinking about the next wall.