Triennale Milano : Giovanni Gastel : The people I like & Jewels of Fantasy 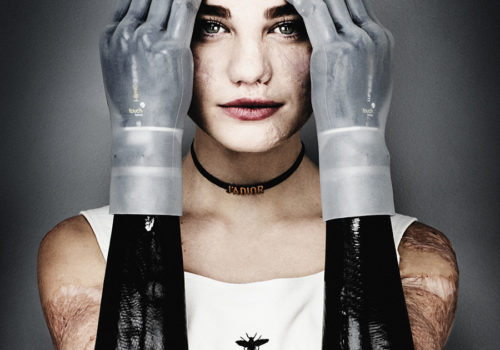 According to Stefano Boeri, President of the Milano Triennale: “Giovanni Gastel was a sophisticated portraitist of the world, photographing bodies, fashion, jewels, fabrics, and interiors in addition to faces. With a smile, he would make the infallible, precise gesture of a great photographer seem easy. His work crossed paths with the Triennale on numerous occasions, providing it with ideas, projects, and inspiration. With these two exhibitions, our institution pays homage to this generous light-hearted genius for the first time. Milan and art lost him far too soon.”

The exhibition title is a declaration of intent: the photographer reveals his most intimate, authentic side, enshrining the “portrait” as an artistic work with no comparison. Presenting over 200 portraits, the exhibition documents an important part of his work. Models, actors, artists, technicians, VIPs, singers, musicians, politicians, journalists, designers, and chefs are all part of a kaleidoscope of photographs displayed in no particular order nor by specific sector or category.

These portraits are not perceived as simple representations of the human physiognomy but allow a truer, inner meaning to emerge: the aim is to explore what lies beyond the surface in order to grasp the complexity of the subject. The focus is always the sitter’s soul, which emerges from their pose, their facial expression, and their body language. The portraits assume a central role that goes beyond physical analysis, digging right into the person’s psychology.

All of the portraits are large format and most of them are black and white while the final section of the exhibition hosts the “colli neri” section, portraits veering into the realm of spirituality.

At the same time, Jewels of Fantasy, a small exhibition held in collaboration with the Museo di Fotografia Contemporanea, provides the precious setting for some of Giovanni Gastel’s earliest works that brought him to the attention of the international scene. Here you will find 20 images from a larger project commissioned by the Daniel Swarovski Corporation in 1991 for a book with the same title that was translated into four languages along with an exhibition of 20th-century jewellery, both curated by Deanna Farneti Cera.

After making its debut at the Museo Teatrale alla Scala, the exhibition travelled for six years through some of the leading applied art museums in Europe (Museum Bellerive, Zurich, Victoria and Albert Museum, London; Museum für Angewandte Kunst, Cologne, Kunstgewerbemuseum, Berlin) before reaching the United States.

Giovanni Gastel gives rise to a fantastical, imaginary re-interpretation of these jewels, unleashing his extraordinary creative vein. Here we find the stylistic elegance and key themes of his artistic research, the syncretic dialogue between the world of objects and that of the human figure, the irony, the body and the mask, the disguise and the metamorphosis, all of which form a fil rouge that would run through his creative journey through his life.

The photographs on display were donated to Regione Lombardia by Lanfranco Colombo and are held in the Museo di Fotografia Contemporanea.

The Institutional Partners Eni and Lavazza, the Institutional Media Partner Clear Channel and the Technical Partner ATM are giving their support to the Milano Triennale for this exhibition.

Giovanni Gastel (Milan, 1955–2021) began his career in a Milanese basement in the late 70s, spending his long photographic apprenticeship taking shots and learning the fundamental techniques of a craft that would bring him success. From 1975 to 1976, he worked for the London auction house Christie’s, putting into practice what he had learnt. The turning-point of his career came in 1981 when he met Carla Ghiglieri, who became his agent, introducing him to the world of fashion: after publishing his first still life in the Italian magazine Annabella in 1982, he began to work with Vogue Italia and then, thanks to his encounter with Flavio Lucchini, director of Edimoda, and with Gisella Borioli, also with Mondo Uomo and Mondo Donna. In the 80s and 90s, Gastel’s career in the world of fashion exploded just as the Made in Italy boom took off. In those years, Gastel developed advertising campaigns for some of the most prestigious fashion houses including Versace, Missoni, Tod’s, Trussardi, Krizia, Ferragamo, and many others. His success in Italy would take him to Paris – where he worked for brands such as Dior, Nina Ricci, and Guerlain in the 90s – as well as to the UK and Spain. Despite beginning his career in the world of fashion, Gastel, who was both a photographer and a poet, soon realized that his expressive drive demanded an outlet in purely artistic projects. It was not long before he received recognition as an artist and in 1997, Triennale Milano gave him his first solo show, curated by Germano Celant. This exhibition took Gastel to the forefront of the world’s photographic elite, consolidating his professional success and ensuring that specialist magazines would mention his name alongside the sacred monsters of photography like Oliviero Toscani, Giampaolo Barbieri, Ferdinando Scianna, and international icons like Helmut Newton, Richard Avedon, Annie Leibovitz, Mario Testino, and Jürgen Teller. His professional success opened the door to another area of his photographic repertoire, which had remained unexplored until the late 2000s: that of portraits. In his final years, Gastel discovered a passion for this branch of photography, plunging himself into it whole-heartedly in his typical fashion.

Produced by: Image Service in collaboration with MAXXI