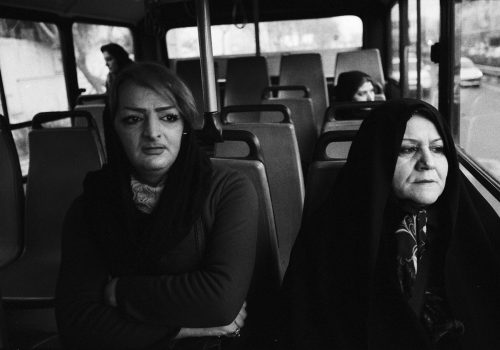 During my photo project about the Molavi shelter house situated in southern Tehran, entitled Grape Garden Alley, a transsexual called Tina caught my attention. She was rejected by her family and society at a young age for the way she looked and her choices and orientations judged taboo.

Tina had to defend herself and tolerate unusual hardships to make it through life. Having spent a year in jail  for drug addiction, she stopped her drug abuse for good but could not alter her actual self; a reality that brocaded her life in many ways, alienating her from the society she belonged to. Due to her strong will and resolute character, she never picked up drugs or went back to dealing again.

In an interview, I had with her she said: “I am ready to forgive my family and my father in particular for having abandoned me but I do not know their whereabouts anymore and have no way of finding out”. In fact, despite the great suffering she had been put through by her family and many others, she was an exemplary individual in the shelter with a sad but inspiring story.

“Some people happen to be men, some people happen to be women, some others are like me. Why should there be a difference between people,” Tina also said while being often offended in the street. She felt safe and more understood by the women; which is the reason of this shelter; to be accepted by a small society. It is a place she can call  “home” after so many years of struggle.

Now she is no longer an addict and rents a room for herself, to live with her dog, and tries to have a better life. She is 44 years old.

Tahmineh Monzavi was born in Tehran, Iran in 1988. She concentrates on social and feminine dilemmas in her documentary photography series.