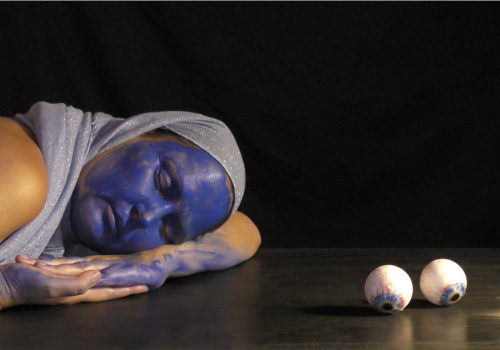 Until May 7, the Topographie de l’art exhibition space presents an exhibition entitled: Femmes guerrières femmes en combat (Women warriors women in combat). We will come back to this exhibition but it is the work of Isabelle Lévénez, at the origin of the exhibition, who died last year that we have chosen to show here. It was the curator of the exhibition Isabelle de Maison Rouge who gave us this text.

The purpose of the exhibition through women artists exclusively, aims to remind us that it has not always been enough for women artists to define themselves as artists to be recognized as such and if, despite the better visibility of their works, the presence of women in this milieu of contemporary art remains confidential despite very significant advances in this field. This exhibition makes visible the commitment of certain artists to causes that do not necessarily coincide with their interests or exclusively with their gender concerns. “Willful” people who take an active part in social and political action, in a public space which for centuries has been, to a large extent, hostile to them, even forbidden. As if it were unthinkable, even today, to consider their participation other than as the usurpation of masculine prerogatives by placing the attributes of virility in competition. In the end, would the woman fighter be condemned to remain a male fantasy? “The first time you defend your cause with arms, you live the fight so completely that you are no longer yourself but a projectile” said Louise Michel and this sentence sums up well the attitude of these women and artists behaving like warriors.

The starting point of this exhibition is the small dictionary of women warriors which begins as follows: “There were, in all times and in all nations, women remarkable for their courage and their determination in exceptional and turbulent circumstances, especially in wars.

Since the earliest antiquity, the contemporaries of such heroines have been taken aback by the reporting of high deeds that they could previously have attributed only to particularly virile men. Hence, no doubt, this latent suspicion that lurks around the great female warriors who marked their century with their exploits: were they really women or were they not these bizarre beings, half-man, half- women, who are modestly treated as viragos? And why, if not to avoid incurring reproach, did they generally take care to dress as men? “.

Born in 1970, Isabelle Lévénez died in October 2020. She lived between Trélazé, Paris and Angers. At the origin of this exhibition Isabelle Lévénez began to work on this issue of the warrior and the fight of women or more particularly of the woman in combat and the artist at the heart of the fight. Isabelle Lévénez has left us but the fight continues. Isabelle Lévénez graduated from the Beaux-Arts de Nantes in 1993 and then obtained, the following year, a master’s degree in arts at the Institut des Hautes Études in Paris. She completed her training with a course in Multimedia Arts and Crafts.  In 1994, she participated in her first group exhibitions.