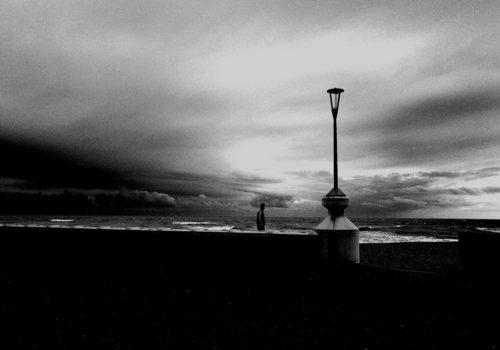 On the pebbly southern coast of the United Kingdom, Brighton has two piers. One of faded glory, the other a wreck. The pier that is still open – scattered with joyrides, video games and fast-food outlets – stretches half-a-kilometre into the Atlantic. What lies beyond is the rest of the world, much of which an expansionary Great Britain once conquered and ruled. The other pier, or what remains of it – just a skeleton of rusting iron – sits forlorn in the sea, a reminder that all things, not only empires but even Industrial Age icons, must pass.

Both piers are easily portrayed as metaphors for the parlous state that once-mighty Britannia finds herself in, and of course one must resist any temptation to portray them as such. They are just piers, after all, hammered by the sea and largely ignored by the modern populace, while the grand dame behind them, Brighton by the sea, survives.

A relic of ornate Victorian times, buffered by crisis after crisis in the capital, Brighton keeps gazing outwards to the waves, refusing to be overwhelmed by tumultuous matters of state and sleaze in London. Here many liberal-minded souls, escapees from Establishment culture, have found new lives in the cobbled lanes of a classic English seaside town. Historically a stronghold of Conservative voters, now it’s the only constituency in Britain held by the Greens. These days Brighton celebrates diversity, non-conformity, with splashes of madness and plenty of booze.

But none of that can erase the darkness, the noir of Brighton. It’s a flaky, seat-of-the-pants town where almost anything could happen, and almost certainly has. (‘Hale knew, before he had been in Brighton three hours, that they meant to murder him,’ begins Graham Greene’s 1938 novel Brighton Rock.) There’s a touch of uncertainty around every corner.

Shooting in colour, you can easily produce a smile in Brighton-by-sea. But if your choice is monochrome, the images and the place are doomed as soon as you press the shutter. In some inexplicable way, Brighton encourages those juices and claims them as its own: the darker the better. That’s me, she seems to be saying. That inkiness, the deep blacks. That’s really who I am, she says. I survive because, unlike London, I don’t chase fashions, trends. I don’t chase rainbows. I can’t be bothered lying, my holiday veneers have peeled away over time.

I keep watching the sea, the only truth.

Tony Maniaty is an award-winning Greek-Australian author and photojournalist based in Paris and Sydney. He has been the European Correspondent for Australia’s SBS Television, Executive Producer of the Australian Broadcasting Corporation’s ‘7.30’ current affairs program, and Associate Professor of Creative Practice at the University of Technology, Sydney. His photobook ‘Our Hearts Are Still Open’ focuses on life in Paris during the 2020 Covid pandemic.