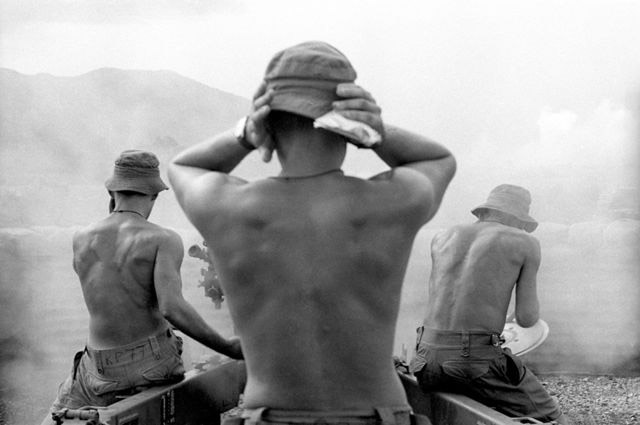 In 1965 photojournalist Tim Page was with the Australian troops in Vietnam when they landed in Bien Hoa. Like many of those he photographed, Page was barely out of his teens, and filled with the bravado of youth. Armed with a bag of film and his camera Page captured some of the most iconic images of the Vietnam War before he was gravely injured and sent to the US to recuperate.

Much has been written about Page whose reputation for wild living was reportedly inspiration for the antics of Dennis Hopper’s character in Francis Ford Coppola’s film Apocalypse Now. Page is in many ways the epitome of the war photographer as described by Phillip Knightly in his seminal work The First Casualty.

As Page approaches 70 years of age he is still shooting, and is as keen as ever to continue to report on stories he deems important. He’s recently returned from Cambodia where he’s been working on de-mining projects and where in the last year he’s had nine exhibitions, many in rural areas where photographs have been hung from trees or in town squares. A documentary film on this work is being shown in Berlin next year.

In his latest exhibition in Sydney – Diggers in the Nam – Page has selected 20 images that have been printed as a limited edition box set by Chris Reid of Blanco Negro, one of the last master printers in Australia. The Australian National Library has already acquired one set and another Page has donated to Soldier On, a not-for-profit organization that works with physically and psychologically wounded soldiers.

Page was the first patron of Soldier On and it is a cause close to his heart. “I’ve suffered from PTSD, I’ve been horribly injured, I know what these returned soldiers are going through and I wanted to donate a box set of pictures with the hope that they will raise enough funds to make a difference”. The Soldier On box set will be auctioned in the coming months.

Diggers in the Nam features classic black and white photographs that “people can relate to,” says Page. “When I was putting the set together I made a conscious choice to include images that have been published in magazines and books – images that people will be familiar with, images that people expect to see from me. There are certain expectations with a collection like this, people assume that there will be images that they know…like Cartier-Bresson’s puddle photograph, people expect to see that in a book or collection of his work…without wanting to sound facetious I chose photographs that I thought would be saleable”.

Page is now living back in Australia and making plans for his next project. “I want to photograph all the returned soldiers who have been disabled. I can see this as a book, and hopefully the Australian War Memorial will come on board. It’s a story that needs to be told”.

Diggers in the Nam is on exhibition in Sydney until January when the show moves to Phillip Island just outside of Melbourne for Anzac Day.