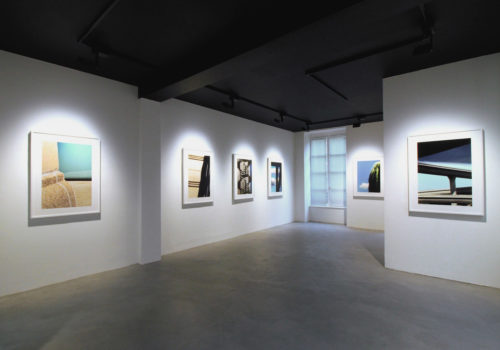 The big day has come. The Thierry Bigaignon Gallery opens its doors tonight with the exhibition Vertical Horizon by Ralph Gibson. We have accompanied Thierry for eight weeks while he was setting up the gallery. Just a few hours before the opening, we have the pleasure of sharing with you exclusive views of the gallery, as well as the name of the artist to be featured in the upcoming exhibition!

How did you spend the last few days? Your gallery opening is tonight: are you ready?

Yes, absolutely. The artworks were delivered last week and we proceeded to install them. Afterwards we were busy with last-minute preparations (invitations, catering…). So now I can say, we’re ready. In the morning, Ralph Gibson is arriving from China today (where he attended a conference), and we are embarking on a daylong marathon of interviews and photo sessions with the press.

What comes next, after the opening?

Ralph Gibson is staying in Paris until Sunday. So we are going to spend the following days meeting the media and collectors. For example, tomorrow, “Barter” Paris Art Club is coming with a group of art lovers and collectors for a private visit and a meeting with Ralph Gibson. Saturday, a filmmaker who has been working for a year on a documentary about Agathe Gaillard will come by to interview us, Ralph and myself, to wrap up his film. After six months spent getting ready to launch the gallery, starting next week I will be able to focus on developing relations with collectors and start preparing for the upcoming exhibitions.

Who will be the next artist to be featured at the gallery?

The next exhibition will showcase the work of Catherine Balet. Catherine is a very unique artist. She takes an anthropologic approach to photography. I already exhibited her work three years ago. It was a series called Strangers in the Light, which reinterpreted a number of great classical paintings, more specifically by placing mobile phones and the light they emanate at the center of the compositions. This series was also published as a beautiful art book by Steidl. On this occasion, starting September 6, I am going to show her latest series, entitled Looking for the Masters in Ricardo’s Golden Shoes, which surveys 176 years of the history of photography! This is a labor of astonishing precision, tenderness, and humor, carried out with her “muse,” Ricardo Martinez Paz, a 74-year-old dandy, as protean as he is charismatic. It took her two and half years of research and intense work to create this magnificent homage to great figures in photography. The 125 images comprising this series are also going to be published as a book, which will be a centerpiece of the exhibition. Getting involved in this homage is of particular importance, as it will allow us to anchor the gallery and the artists we support in this wonderful story of photography, and thus pave the way for the future!

Thierry Bigaignon: The portrait of a future gallery owner