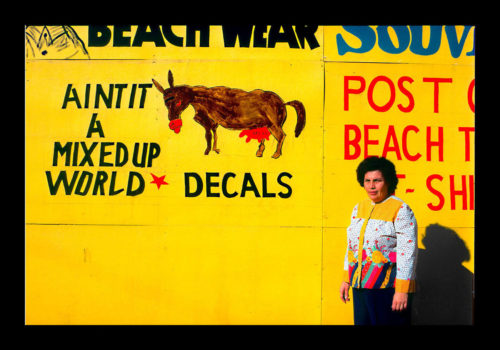 These Days presents the exhibition Generations by Scot Sothern.

In this exhibition, artist/writer Scot Sothern—best known for his controversial and lauded work LOWLIFE, photographs and stories of street prostitutes in and around Los Angeles during the 1980s—has compiled two bodies of work made nearly fifty years apart. Collected under the shared title GENERATIONS are Sothern’s earliest personal photographs, FAMILY TREE 1975 – 1980, and his most recent body of work, IDENTITY, both of which explore time, change, and the multi-directional evolution of America.

GENERATIONS’ point of departure is FAMILY TREE 1975 – 1980. This series encapsulates some of Sothern’s earliest personal photographs, which he began making soon after leaving the small Missouri Ozarks town where he was raised. In his late teens he left the confines of his father’s portrait and wedding photography studio to chase the 1960s glorification of sex, drugs, and rock & roll. He worked as an itinerant photographer with a cache of gimmicks and a conman’s mindset. During this period he was also making photographs of characters he met along the way. In 1975, When Sothern began the FAMILY TREE series; complete strangers were more trusting of a person with a camera. Suspicion and mass antipathy had not yet blanketed the country, and a million-selfie-a-day habit hadn’t yet degraded the personal and sentimental value of the snapshot. The FAMILY TREE photos, shot on Kodachrome and printed as Cibachromes (both discontinued), combined with Sothern’s written accounts of the interactions they document, are unique and meaningful stories of another time. These Days will publish a limited edition monograph of this series to coincide with the exhibition.

IDENTITY, Sothern’s newest and most original project, explores time and vast change from as far back as the American Civil War, with comparisons to the current American civil discord. Working with found antique, glass-plate ambrotypes and using Photoshop to print and size contemporary images, Sothern then physically binds these elements together to create small art works that are equally digital and analog—both handmade, and technologically advanced.

About the Artist
Writer/photographer/artist Scot Sothern grew up in his father’s portrait photography studio in the Missouri Ozarks in the 1950s and 1960s. A product of the sixties cultural revolution, he ran wild through the 1970s and supported himself as an itinerant portrait photographer. In the following years he took jobs here and abroad that kept him behind a camera and in the darkroom. By the 1990s he had become an autodidact writer as well. In 2010, at sixty, his first solo exhibit, LOWLIFE, photos and stories of life with street prostitutes, was held at the notorious Drkrm Gallery in Los Angeles. Scot’s first book of the same title was published in the U.K. by Stanley Barker in 2011. The British Journal of Photography called LOWLIFE, “the years’ most controversial photobook.” LOWLIFE immediately found its way into the international art photography community. This work along with other photography projects has since been exhibited in Los Angeles, New York, Miami, London, and Paris. Solo gallery shows have included Little Big Man Gallery in LA, Dan Cooney Fine Art in NYC, and Mindy Solomon Gallery in Miami.  In 2013 Sothern began a biweekly column, Nocturnal Submissions, for VICE Magazine, and Curb Service: A Memoir, was published by Soft Skull Press. Writer Jerry Stahl called it “An absolutely amazing and essential book.” STREETWALKERS, stories and photographs, was published by powerHouse Books in February 2016. “This penetrating book of photographs and text will haunt and challenge the viewer,” writes Roger Ballen.
BIG CITY, a novel, was published in 2017 by Stalking Horse Press. Other books include SAD CITY published by Straylight Press, and A New Low and Little Miss by drkrm editions.